Ben Palmer explains why Andrelton Simmons' 2017 season could happen all over again.

Well, not nowhere. In 2013 with the Atlanta Braves, Simmons hit 17 home runs, but after that, his offensive production plummeted. He became a guy who’d hit for a below-average batting average with no power to speak of and little speed. But he’s quietly, and gradually, been improving his bat over the past couple years, and what he did last year is a result of that.

The batting average has slowly but surely been improving, and a lot of that has been thanks to his BABIP slowly normalizing, there’s a pretty obvious correlation there: 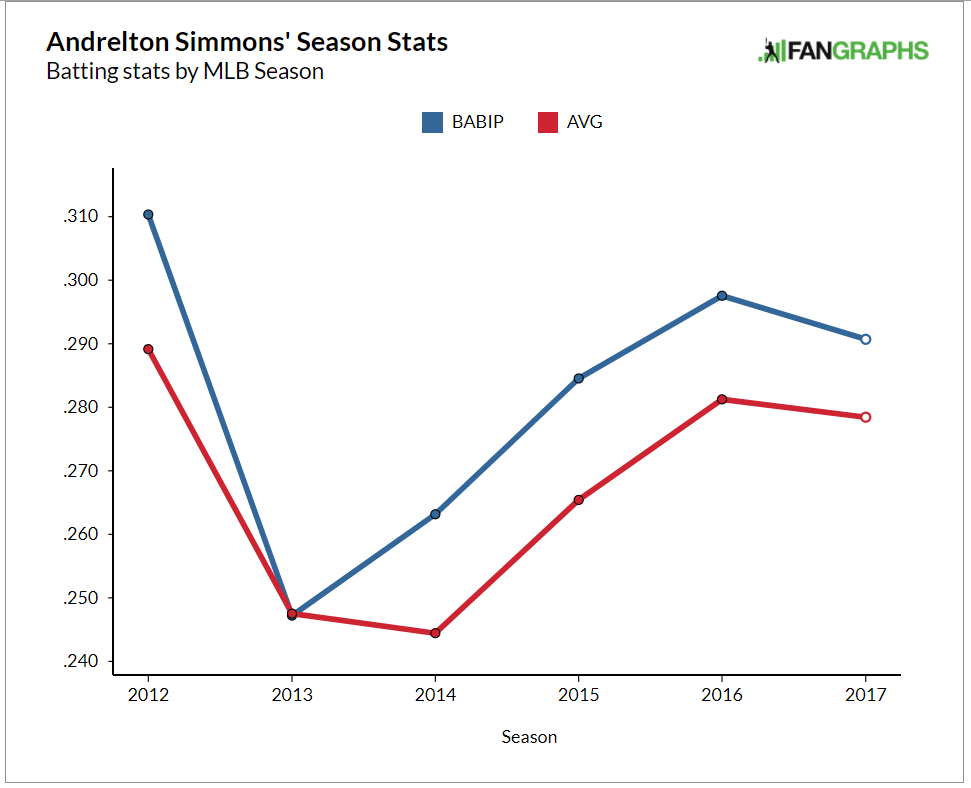 The steals have steadily been increasing as well mostly thanks (I believe) to him joining the Los Angeles Angels. With the Braves, he never stole more than six bases in a season, but once he joined the Angels, his steals hit the double digits.

But the biggest question about Simmons’ 2017 is the power. The steals are nice, the average is nice, but that’s not a super useful fantasy player unless he has that power to go with it, and it looks like the power is totally legit.

There are two pretty noticeable things that Simmons did last year that’s been different from years past: pulling the ball more and increasing his launch angle.

First, his pull rate. It jumped up last year to 45.3% from 35.7% the year before, and you can see it’s a noticeable difference: 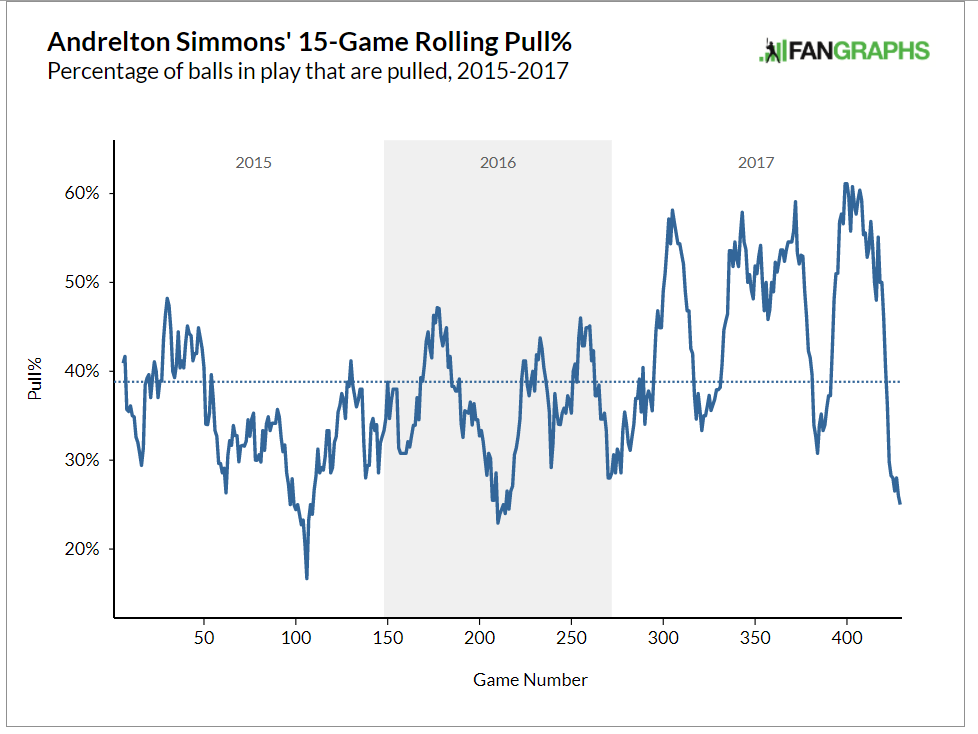 The vast majority of the home runs he hit at home were out of left field, which makes sense if he’s pulling the ball more. 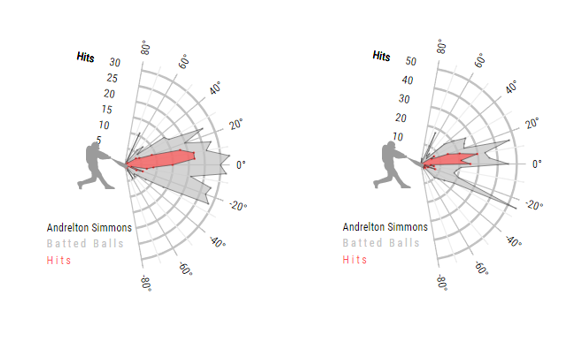 In 2016, Simmons was hitting the ball a lot straighter or he was hitting pop-ups, but in 2017, he started lofting it a bit more often without hitting it too high. As a result, he saw his groundball rate drop: 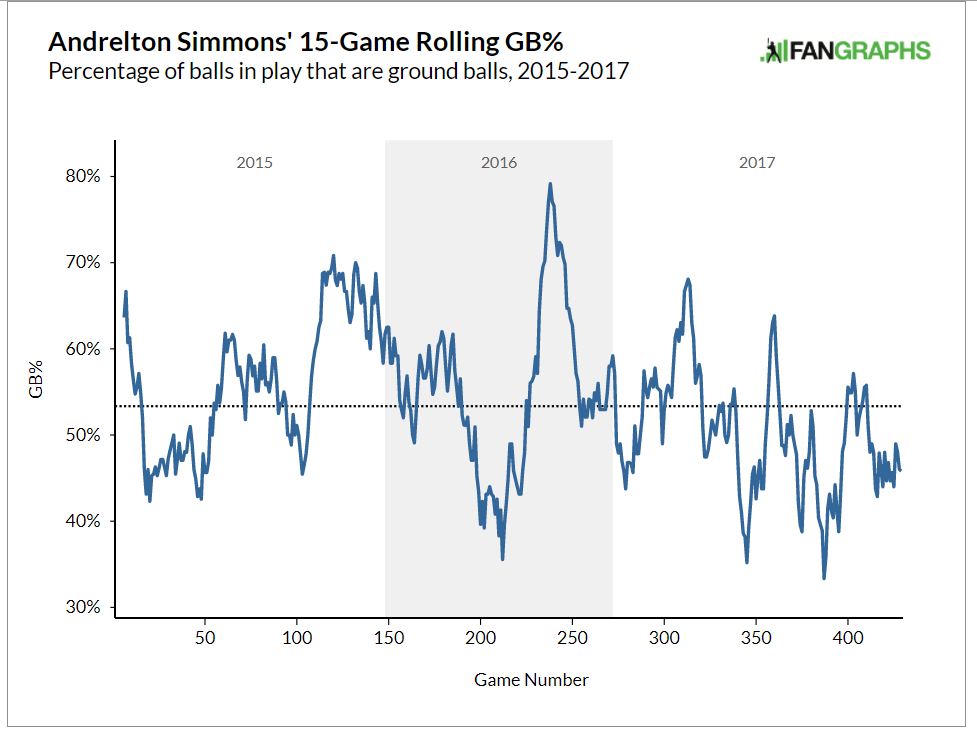 And his ISO stay consistently higher: 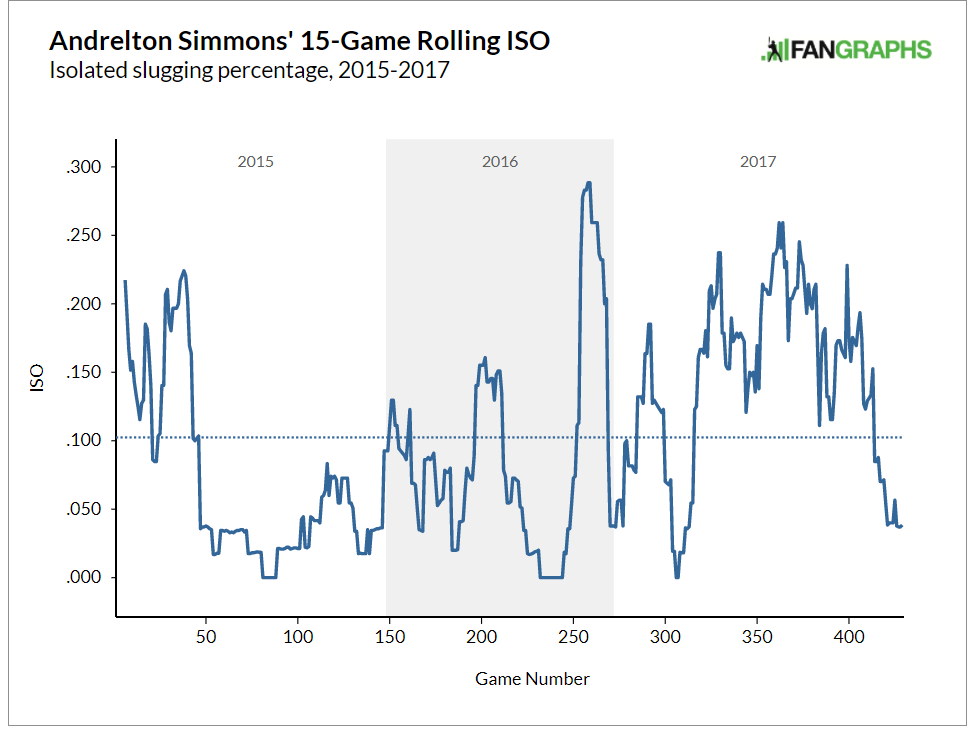 It’s not a gigantic difference, but it’s enough that, when combined with the increased pull rate, his home runs increased pretty meaningfully. The increase in power is supported by his xSTATs as well, as he finished last year with 13.5 xHRs.

If Simmons keeps this up, and I don’t believe there’s any reason to believe he won’t, he becomes a very interesting fantasy option at shortstop at a pretty low price. Likely most of you have already had your drafts, but considering Simmons’ NFBC ADP was #211, after guys like Jose Peraza and Tim Anderson, there’s a halfway decent chance that he might have gone undrafted in 10-team leagues. If that’s the case, absolutely go grab him, and if not, he’s someone I might try and trade for if I didn’t necessarily get the shortstops or middle infielders that I wanted to in the draft.

Senior columnist at Pitcher List. Lifelong Orioles fan (which can be....painful at times) and a Ravens/Wizards/Terps fan. I also listen to way too much music and watch way too many movies.