Nick Markakis has been really good this year, and it looks pretty legit.

But guess what? There’s more to it than that. Markakis has made a real, actual, noticeable change in his approach this year, and it’s translated to what has the potential to be one of the best seasons of his career, which is kind of insane at age 34.

In fact, it looked like Markakis was rapidly entering the twilight of his career. His power—which wasn’t much to begin with after his two 20 home runs seasons—began to really decline, he started striking out more, it just wasn’t looking good. Once he joined the Atlanta Braves, it seemed like he’d just be a guy, a useful veteran who could still play good defense and hit for a solid average, but not much else.

But now, here we are in 2018, and it looks like Markakis is going to have the best year he’s had in a long while, and a big part of it is thanks to a noticeable increase in his launch angle.

On the left is Markakis’ launch angle from the start of his career through 2017. On the right is his launch angle so far this year: 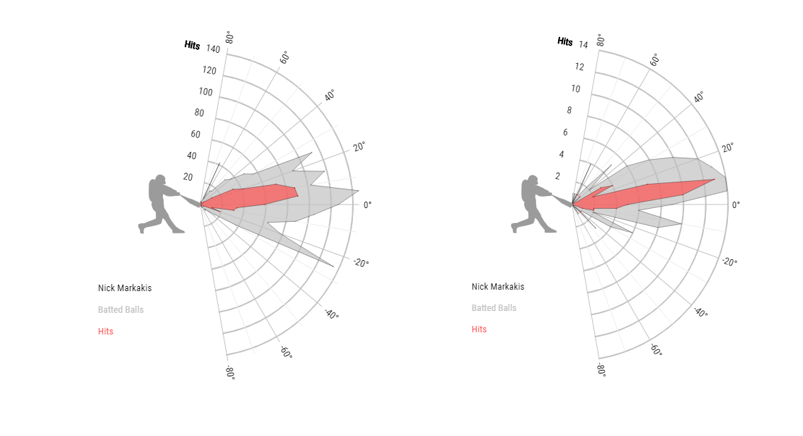 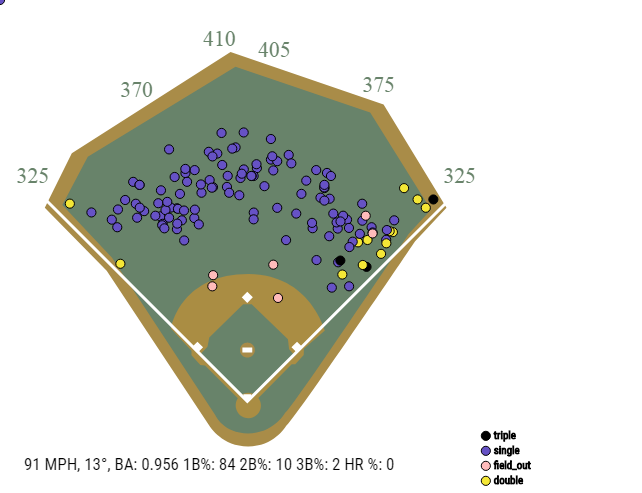 You can see how this change has affected things from his batted ball profile. Along with the fact that Markakis has the second-highest hard-hit rate of his career so far this year at 34.2% (the highest was 2007 at 34.8%), he’s hitting fewer groundballs than ever before: 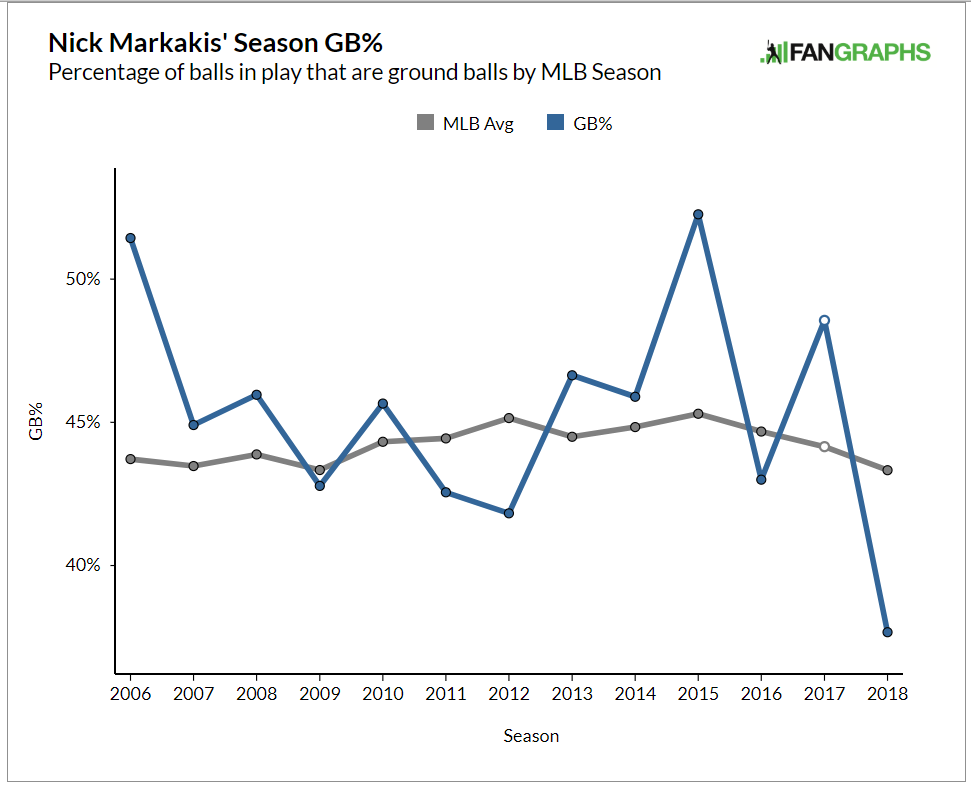 And more line drives than ever before: 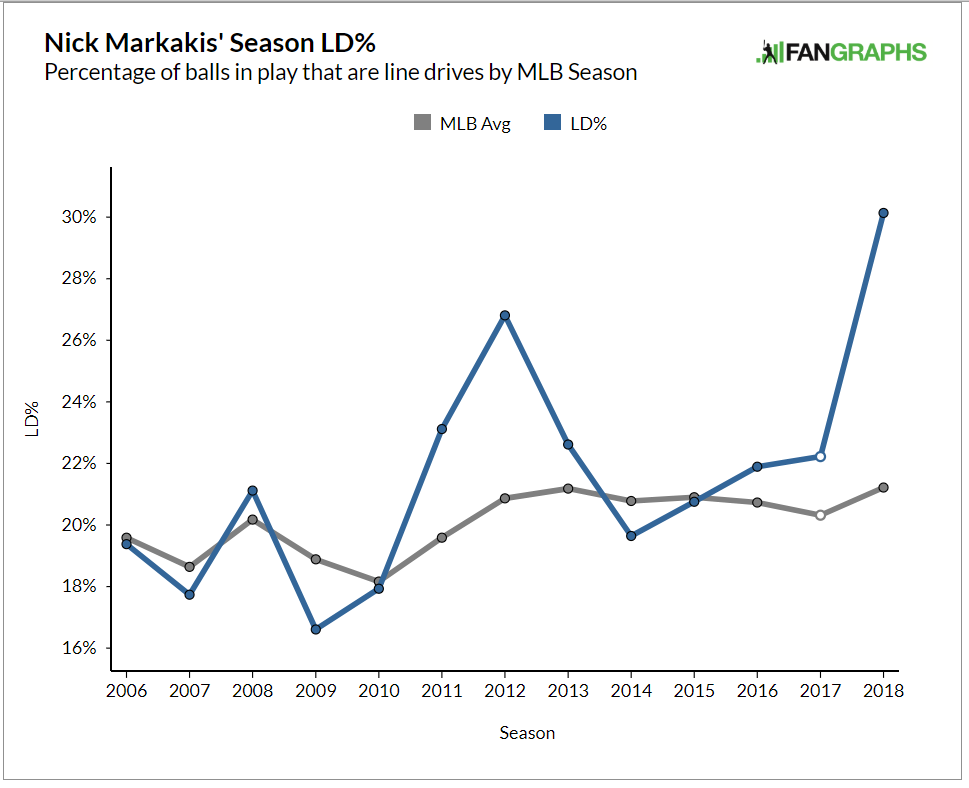 Markakis has also taken his plate discipline to another level. He’s always had good plate discipline, but it’s gotten exceptionally good this year. His walk rate is at the second-highest of his career (10.9%) and his strikeout rate has absolutely plummeted: 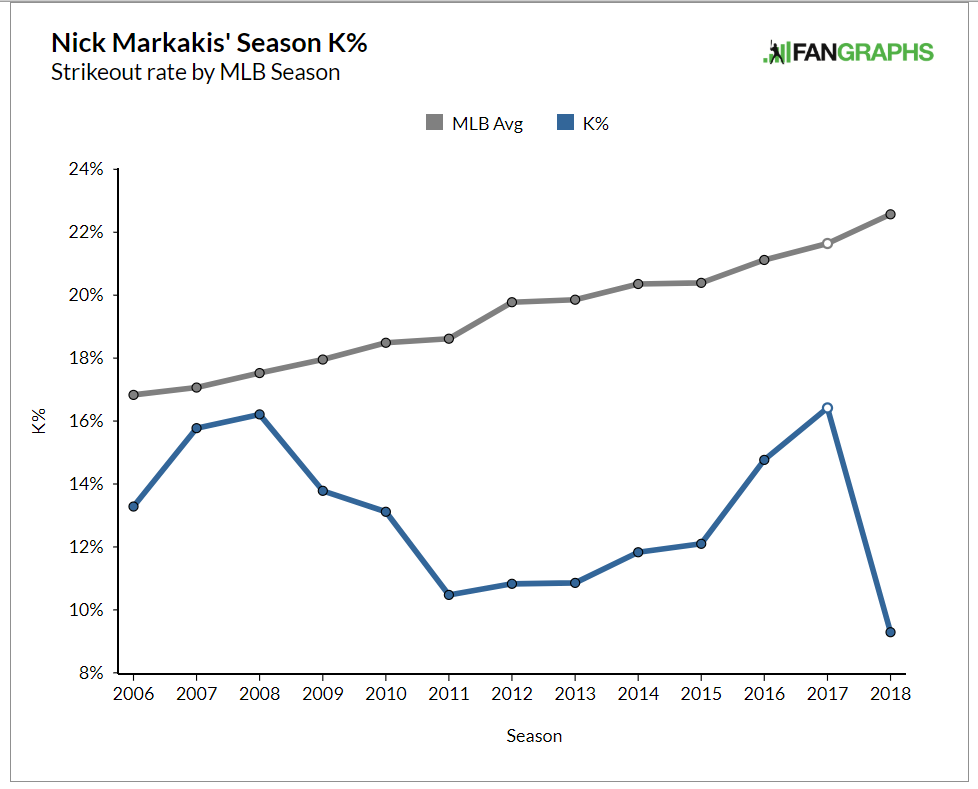 Markakis’ success is mostly supported by his xStats too. On the top are his actual stats, below them are their xStats equivalents (for any definitions of xStats, check out Dave Cherman’s Intro to xStats article):

Yes, regression is in order for Markakis, I don’t think anyone thought he was going to bat above .340 all year, but it’s not nearly as much as you might have thought it’d be, except in one area—his power. At his current pace, if Markakis plays about 160 games like he has the past few years, he’s on track to hit 25-30 home runs. That’s not going to happen, and that early power success can be traced to an elevated 14.9% HR/FB rate (compared to a career 8.2%).

But while the power may decline, the average is going to stick around, and given how good the Braves’ lineup has been lately, there should be a sizable number of runs and RBIs in store. So could Markakis end the year with a .310-.320 average, just under 20 home runs, and 80-90 runs/RBIs each? I think that’s absolutely possible given the changes he’s made to his approach, which would give him a season slightly better than what Josh Reddick did last year or slightly worse than what Justin Turner did, and that’s significantly better than what was expected of him this year.

So yea, Nick Markakis is actually doing this.