Creating a Mascot for the Angels

Going a little bit beyond the Rally Monkey! With these criteria in mind, I thought it would be a good idea to design a mascot for the Angels, who currently have no official mascot. Even if you don’t think the Angels (or the Dodgers, or Yankees, who will be later iterations of this series) need a mascot, we’re going to pick one anyway for the sake of this exercise.

Granted, the Angels have unofficially used the “Rally Monkey” as their mascot. It started as the mascot in 2000, when the video board operators took a clip of a monkey from “Ace Ventura: Pet Detective” and displayed the words “Rally Monkey” over the top of the monkey as it jumped around on the screen. After the fans loved it, they hired a capuchin monkey named Katie to star in clips for games, jumping up and down to House of Pain’s “Jump Around.” Katie also played Marcel the Monkey in Friends.

Let’s start by keeping the monkey as the mascot. It’s been with the team for 20 years now, and they have used it in so many giveaways that it’s practically synonymous with the Angels. I can’t tell you how many different Rally Monkey giveaways (here’s the 2019 giveaway schedule to give you an idea of some of them) I’ve grabbed over the years when going to Angels games.

So, we have a monkey as our base. Let’s give the monkey a name. We’re going to skip past the obvious “Rally” choice. A lot of people in the survey suggested the name have some alliteration in it because a lot of other good mascots have utilized that practice (Phillie Phanatic and Bernie the Brewer, to name two). So, we’re going to need a first name for our new mascot, with the final name being “___ the Monkey.” We could go with Mike the Monkey, named after the greatest Angels baseball player to ever live. Or we could go with something cool, like “Max” or “Miles” or “Marc.” Naming the mascot “Mike the Monkey” would be cool but might be a little too on the nose right now, especially with Trout under contract for many more years. We don’t want things to be awkward between the mascot and the franchise player. So, I think I like “Max the Monkey” as the official name of our mascot. He’s going to join mascots like Clark the Cub as animal mascots with alliteration.

Now, we need a backstory for Max. We already have much of his origin story written out – He was Ace Ventura’s pet monkey and friend – but we need to supplement it. Even Gritty has a backstory, and he was revealed at a press conference just a couple of years ago. I propose that Max the Monkey’s backstory begins at the Jungle Cruise in Disneyland in Anaheim, which is just a few minutes away from Angel Stadium. Max the Monkey lived among the animals and the plants in the Jungle Cruise. He was happy to spend his time among the animatronics and wave at people cruising by. But Ace Ventura came calling. He invited Max on a few journeys (the “Pet Detective” movies), which got him interested in sports. Since Max lived not far from Angel Stadium and saw many Angels fans pass through the gates of Disneyland, he developed a love for the Angels and for baseball. Max became crazed for baseball, stealing Disneyland visitors’ Angels hats and Angels clothing whenever he could. When the Angels showed a video of Max jumping up and down during the World Series, which inspired a wild comeback in Game 6 of the 2002 World Series, Max decided it was time to go out and see an Angels game.

Max enjoyed watching the Angels so much that he decided to make his permanent home in Angel Stadium. He now resides within the rock pile in center field, which is especially significant because the rock pile was created as part of the renovations that occurred while Disney owned the team. And he has lived there ever since, setting off fireworks from the rock pile every time an Angel hits a home run or the Angels win a game. He emerges from his rock pile during games to interact with fans, baseball players, and the other team when necessary.

We already know that Max fits the criteria for this, as the Angels have been putting together a Rally Monkey giveaway at least once a season, with different themes for each of their giveaways. We’ve seen everything from Surfer Rally Monkey to Chewbacca Rally Monkey, and kids love those giveaways. Parents bring their kids exclusively to giveaway nights at Angel Stadium.

The Junior Angels Kids Club also features a whole lot of Rally Monkey giveaways and stickers, so clearly, the Angels’ staff thinks that kids love the Rally Monkey as much as the rest of the fanbase would.

They Bring a Lot of Energy

We know Max can bring a lot of energy – the video on the Angel Stadium jumbotron shows Max’s excitement for baseball, for rallies, and for jumping up and down – so this shouldn’t be much of a problem. Although we haven’t seen Max in action as a mascot, we have to hope that he brings that same energy every single home game to keep the kids invested.

Nearly all of the most popular mascots have some sort of signature move or signature event during the game. The Phanatic has his ATV, Bernie Brewer has his slide, and so on. So, we need a signature event for Max. I think we pretty much already have that down with the origin story and the jumbotron.

We need a time during the game – maybe like the fourth or fifth inning, when the Angels pull their starter – to have Max jump up and down on the top of the dugout covering while the stadium plays “Jump Around” by House of Pain. It’s a little unoriginal, since the team has more or less done this already, but it ties into the already-existing culture and team history.

This one seems pretty self-explanatory. Max is goofy, funny-looking, and will hopefully bring the silliness to every home game.

However, I think Max could use something else to distinguish him from other mascots, like a piece of apparel or something similar to the Phanatic’s ATV. What could we pick? How about something that ties into the culture of Orange County and connects to previous Rally Monkey giveaways? We’re going to avoid the Disney connection here and give Max an Angels surfboard he can carry around. When he appears during the game, he can carry the surfboard (with red, white, and gray colors) under his arm and even put sunglasses on, if need be. If he needs to get around the stadium, the Angels could equip him with one of those remote-control skateboards, which also ties into Southern California (and OC) culture.

Finally, here’s what I think Max would look like in mascot form: 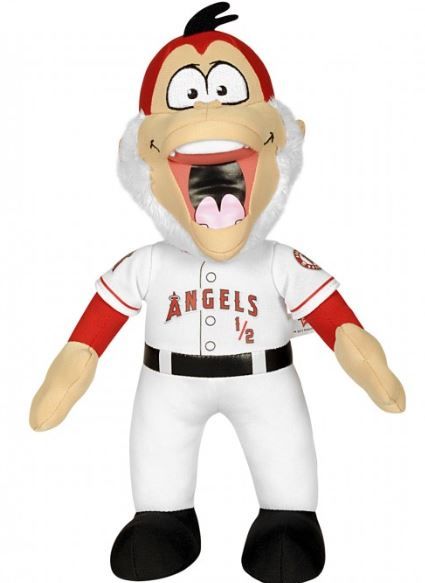 It’s a little rough around the edges, I know, but adding a hat to his head and closing his mouth a little bit would probably fix the problem, right?

If you have any ideas, criteria to evaluate mascots by, or thoughts on Max the Monkey, please leave them in the comments!