A Man Walks Into An Escobar

Last night’s Mets and Marlins game came with late-inning fireworks provided by Eduardo Escobar productions. In the 7th inning, he started with a two-run blast, his 20th, that gave the Mets a glimmer of hope. Then, he added an 8th-inning single with the bases pack to score two more teammates. And for the finale, another single in the 10th inning with Francisco Lindor crossing home plate for the walk-off hit. As the night completed, Escobar was 3-5, HR, R, and 5 RBI.

It’s been a tale of two halves for Escobar, who struggled in the first half and was basically below replacement level (93 wRC+). And then…the second half came, and he turned it on. His OPS shot up 160 points, and most importantly, the power arrived. Additionally, most of his damage has come since the calendar flipped to September. Over his last 103 plate appearances, Escobar is slashing an incredible .330/.379/.638 with eight HRs.

Escobar’s heroics came at the perfect time for the Mets, as the team sits a game ahead of Atlanta in the NL East standings. With an off day tonight to regroup, it’s a make-or-break series against that same Atlanta team this weekend. This is the place to begin if you’re looking for playoff-type baseball to watch before football. Will New York collapse, or will Escobar and company put any doubters to bed before the postseason begins?

After spending much of August in the minor leagues, De La Cruz is back to reclaim his spot among Miami’s outfield. Furthermore, one way to stand out is by taking Taijuan Walker deep for your 12th HR and chipping in a couple more base hits. Since his return, De La Cruz is slashing .396/.433/.755 with an astonishing 224 wRC+. If you’re searching for that September hero that could win you a title, he’s still available in over 80% of Yahoo leagues.

Hats off to Aaron Judge as he sent his 61st HR into the bullpen during last night’s game. We’ve written plenty about him in the Batter’s Box. However, should he swat another one into the stands, he’ll write his name into the history books as the most HRs hit in a single season by a member of the New York Yankees. With seven games remaining, how many do you think he’ll finish with?

If you think you’ve heard Jake Cave’s name before, you’re not mistaken. In fact, he’s been barreling baseballs (10.1% career barrel rate) at the MLB level since 2018. However, he hasn’t topped 200 ABs since then. You might ask, why does a player with a better-than-league average barrel rate not stick around? Well, a glance at the graph below depicts his K-rate by season. 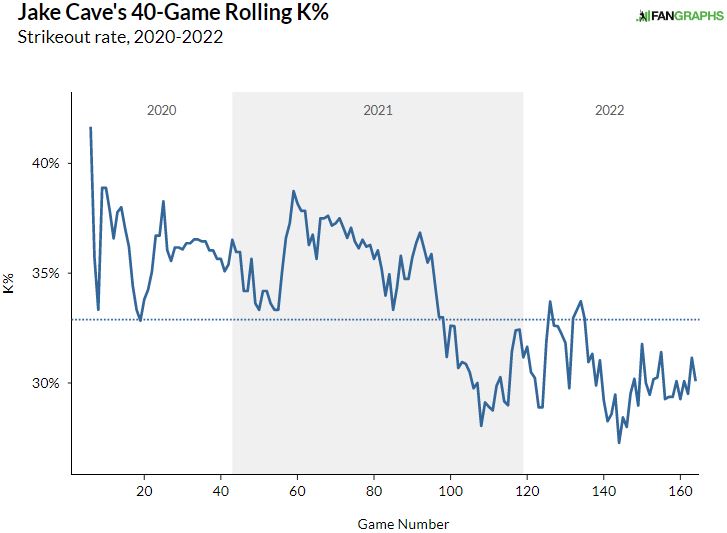 You’re correct if you guessed Cave strikes out at a tremendous rate. However, he’s cut it back to only 28%. Still a bit too many, and time’s running out as the Twins’ outfielder turns 30 years old in a few months.

Miggy batted in all of Detroit’s runs during the 2-to-1 nailbiter. While the 1st inning dinger was only his 5th of the season, it’s also his 507th career. At 39 years old, father time appears to have caught up to Cabrera, and he isn’t quite the same player as his well-decorated 20-year career would dictate. Although, his contract goes until 2023, and we’ll get one more season from the veteran first basemen.

Houston’s offense sputtered all night. Except for McCormick, who found his way on base four times. His outstanding performance was a 5th inning two-run blast of Zac Gallen, his 14th of the season. With the departure of George Springer, a trio of Jose Siri, Jake Meyers, and McCormick were supposed to fill the void. However, McCormick’s last man left standing as he cut the K% by six points and bumped the walk rate to 11%. Indeed, that’ll earn you everyday playing time.

With a roster depleted of star-caliber talent, Morel was thrust into the lineup to see what the 23-year-old utility player could do. And for a moment, he looked like a future All-Star by smashing seven HRs in his first 180 ABs. But then the pitchers adjusted and eventually found holes in his swing. Ultimately, the hot start fizzled, and he struck out 40% of the time in August. As the season winds down, Morel is still an intriguing piece for the Cubs to monitor since he can play all over the field while bringing a diverse skill set of speed and power.

Washington decided to play “spoiler” last night as they routed Atlanta by a score of 5-to-3. Additionally, while Abrams only crossed home play once, his 10th inning walk-off RBI single gave the Nationals something to smile about. For Abrams, his free-swinging nature has become problematic, and the walk rate is under 2%. On top of that, he’s only hitting the ball over 95 mph at a 24.5% clip. Still, he’s only 21 years old, and there’s lots of time for growth and development.

Before getting removed from the game, Joc was a force from the leadoff spot. Another triple, included in his shortened success, gave him back-to-back nights with a triple-bagger. However, he’s been known for displaying power rather than speed. This hasn’t been much different, as he’s pumped 23 balls into the stands and done so with 86% of his AB vs. RHP. Lastly, he becomes a free agent next season, and someone looking for thump from the left side will indeed be calling.

Wallner has been an intriguing bat since joining the MLB squad. In his 12 games, he’s 11-for-40 with a couple of HRs and five extra-base hits. While he hasn’t swung out of the zone much(28.4% O-Swing%), his 62% zone contact is atrocious. Furthermore, Wallner’s living on the edge with a 40% K-rate. Put all that aside, though, because when he makes contact, it’s tremendous. A 13% barrel rate and a 59% hard-hit rate are insane. This type of profile rarely lasts more than a short period, and one of them has to give.