Ahh the unheralded hangover of a month that is May. The month where we separate the rats from the raccoons as we fight under the cover of standings that do not properly reflect the merit of our teams.

Opening day hype is effortless but only the best owners can retain that Christmas morning of box score bliss as the months turn. May is the month where gridlock begins—where buy lows are swiftly rejected and buy highs haven’t racked up the track record to justify the price their ruthless used car salesman of an owner is presently peddling them at.

This leaves you with little option but to scour the roster fringes for the legitimate gem your lineups so desperately need. Let me assure you, that oasis of value exists. Somewhere on your waiver wire or on the end of your friend’s bench is an under-appreciated asset eager to lead you to glory and together we will find them.

Armed with the swagger of Willie Mays Hays and the exact same publicly available analytical tools anyone with a WiFi connection can access, we step up to the plate:

From his awe inspiring athleticism in CF vacuuming liners like he was a Roomba to the dust filled binder of Pokémon cards that he apparently harbors, Harrison Bader is gonna catch ‘em all.

What a strange opener you say—how could the starting CF for the Cardinals and a bygone (yet resurgent) phenomena like Pokémon be presently linked? 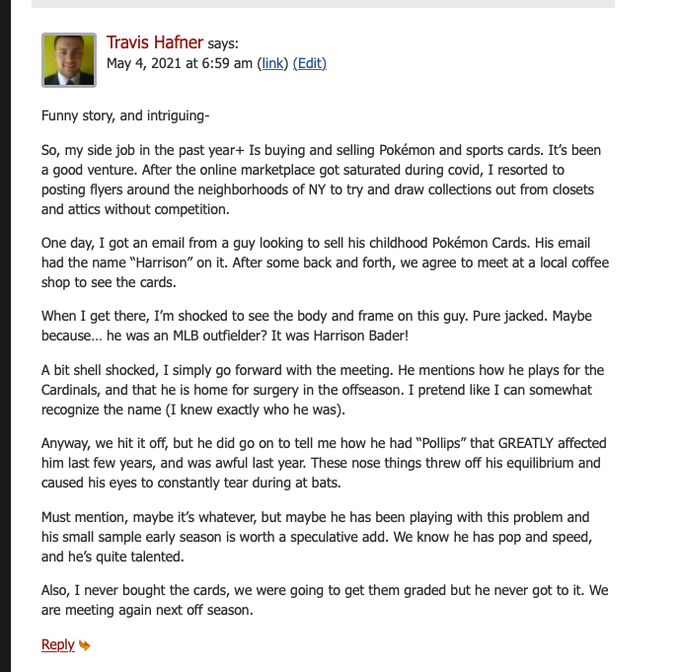 Setting aside that Travis “Pronk” Hafner is somehow a kingpin in the black market for Pokémon cards—what an unbelievable context to Bader’s 2020 performance. A 2020 season that saw Bader struggle to a career high 32% K rate. Although I can’t act as if I have any understanding on the effect of polyps on baseball statistics this provides us an angle to further understand Harrison Bader’s performance from 2020 through today.

Now cleared of the burden of the tear inducing polyps (and Pokémon cards), Bader is showing a profile so drastically improved that he warrants greater attention. Bader, who has only played 10 games this season, has cut his K rate from 32.0% to 13.5%. Furthermore, K rate is one of the first metrics that stabilizes (typically around 60 PA—Harrison is at 37 PA). You should wait to fully give this credence but if these results hold—the potential for a career year is tantilizing.

Lets take a look at his plate discipline metrics to further emphasize the metamorphosis of our grand Pokémon trainer:

So, Bader is swinging at more pitches in the zone, chasing fewer pitches out of the zone and whiffing at career low rates. This supports the lowered strikeout rate we found above. Augmenting the potential here Bader has always had elite speed (92nd percentile or greater every season) which has netted him two stolen bases in his first 10 games and a career high of 15 stolen bases in 2018.

If Bader can maintain his K rate gains there is potential that he can set career highs across the board even despite missing most all of April. For fantasy owners this means power and speed. Although he has topped out at 12 HRs so far in his career if he is seeing the ball better and striking out less there is room to suggest a 15/15 or dare I say 20/15 season could be in the Cards for Bader.

Despite the small sample size this is a profile and Pokémon story undoubtedly worth speculating on. Although I will contextualize this by imploring you to follow the above statistics as Bader increases his sample, there is enough here that this breakout could be…

Adolis García is scintillating. The bat flipping, baseball barreling, speedy 28-year-old rookie in Texas is quickly skipping down the first base line into the hearts of the fantasy community.

Currently in the top 20 overall on Razzball’s player rater despite not even making the cellar-dwelling Rangers roster until April 13, García has been one of, if not the greatest stories of the young baseball season. Such a miraculous run from obscurity hearkens back to the barnstorming debuts of his fellow Cuban countrymen Yasiel Puig in 2013 and most recently Randy Arozarena in 2020.

As with the above two names, this will be a study in extremes. A profile so explosive yet flawed that his range of outcomes mirrors the disparity in his metrics. For Adolis, his Savant profile really tells the whole story: With an elite barrel rate, high-end speed portending SB potential and K rate, whiff and chase rates that would lead many big leaguers to be DFA’d—García is as all or nothing as they come. Unlike his teammate Joey Gallo, he is more of a two-outcome hitter—bypassing the walks for even more bombs and K’s.

Comparing his xStats to his present output it is clear that Adolis is over-performing in some regard.

However, given the above barrel rates it is also clear that Adolis’ power is real. This is further established with his 32 HR AAA season in 2019 where he played alongside Randy Arozarena in an OF that may lead the hot streak hall of fame. But, with a 30.3% K rate and a 31.2% Whiff rate he is likely going to be unable to sustain the power at the absurd rates he has so far this season.

Despite the warning signs of impending regression Adolis’ breakout is legit, the thump on his bat is comparable to the elites of baseball but be prepared for some K-heavy swoons in Adolis’ future. This will likely lead him down closer to or even below his .256 xBA. Further, despite the 84th percentile speed he has demonstrated I wouldn’t be lulled into praying on Adolis to save my SBs. Even though he had 14 SB in that 2019 AAA season, he is currently a red-light-worthy two for five on SBs this season.

Although I believe García’s power is real, I cannot confirm legitimacy for García at his present rate of success due to the aforementioned metrics. If you can sell high, you should. Accordingly, I am classifying this as legitimate enough to celebrate a significant 30+ HR potential power breakout. But, starting down the barrel of inevitable regression I am giving Adolis a qualified…