Nick Bucher pulls back the curtain to show just how Wade Miley has been so successful in 2019, and explores whether his improvements are sustainable.

This sport is chock full of “baseball lingo,” phrases that often do not mean what they may appear to, and at times can even be counterintuitive. One example of this is how every MLB team has a nominal “ace,” but that does not mean every club truly has an ace, just that each has someone it views as being the best of potentially mediocre options. Similarly, a popular description for a middling starting pitcher is to refer to them as a third or fourth starter. Astute fans can easily distinguish that John Means isn’t actually an “ace” just because he’s the best of the Orioles’ poor options and that Zack Greinke isn’t actually a mid-rotation arm just because he’s behind Justin Verlander and Gerrit Cole on Houston’s starting staff.

One of the most intriguing and surprising oddities this season is related to the baseball terminology, and that has been the unexpected emergence of the suddenly superb Wade Miley… the Astros’ fourth starter. Buried behind the top trade acquisition in the league (Greinke), as well as the current 1A and 1B in AL Cy Young consideration (Verlander and Cole), Miley is putting together a 2019 campaign that none of even the most optimistic projection systems saw coming, and because he’s still only the fourth-best option on his own team, he’s less buzzy.

Miley boasts a 13-4 record, accompanied by a 3.06 ERA and 1.22 WHIP, with 134 strikeouts across 156 innings in 28 starts. Of course, before we just declare Miley a star, let’s take a deeper look into what he has done in 2019 to generate so much success, and make sure he’s not just benefiting from a culmination of a bunch of lucky breaks.

What’s Under the Hood?

His Baseball Savant page has an excellent amount of red, as Miley ranks in the top third of all starters in a number of categories including: xBA (67th percentile), exit velocity allowed (74th percentile),  xwOBA (76th percentile), xSLG (77th percentile), and hard-hit percentage allowed (79th percentile). Miley isn’t fooling hitters with velocity, as his average fastball velocity is among the bottom 5% in the league, but he generates close to a league-average amount of spin on both the fastball and curveball, and the slightly below-average strikeout percentage is more forgivable when it is alongside such strong numbers everywhere else. 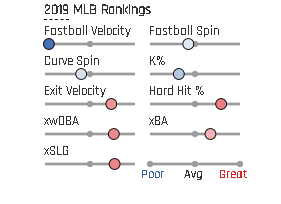 These numbers are supported elsewhere in Miley’s profil, as his xwOBA of .289 is not only strong but also is a touch lower than his actual wOBA of .294, suggesting that if anything, Miley has been a hair unlucky this year. That xwOBA figure is better than that of Clayton Kershaw (.294), Shane Bieber (.296), and Aaron Nola (.297), just to name a few high-profile starters. Miley isn’t necessarily the same caliber pitcher as all of them, but just in case there were still concerns he had been “lucky,” now we know he has not been.

When examining how the crafty lefty is able to be in that elite company, one reason is opposing batters have had few instances where they crushed Miley’s offering. Among pitchers with at least 300 batted balls put in play this season, Miley ranks among the league leaders in the amount of “barreled balls” allowed, as only 21 all season have been recorded off him. That’s only 3.2% of plate appearances ending in a hitter putting a ball in play with an exit velocity of 98 mph or higher with a desirable launch angle that typically leads to a great outcome for the batter. Miley’s passable if not uninspiring strikeout numbers are easier to stomach when they are behind a profile of so much weak contact. That said, he also has reached his end results in different ways than many fans who just glance at box scores may realize, and to see what may be behind the success, let’s take a look at a few of his pitches in action.

In the video below, here is Miley’s big curveball. Watch him pull the floor out of this one here on May 24 against J.D. Martinez of the Boston Red Sox:

Miley’s changeup has been successful this year as well—this one specifically earned him a “helmets off to you!” from Shohei Ohtani on August 24:

It’s understandable when Miley has such strong off-speed offerings to be late on his four-seam fastball, especially when he elevates it in the zone, as he does here on June 9 against the Orioles’ Jonathan Villar:

An Evolved Plan of Attack

The strikeout of Villar on a fastball is notable because, for much of his career, Miley’s fastball has not graded out as a very good pitch. According to FanGraphs’ Pitch Values, Miley’s changeup and cutter have easily been his two most dominant offerings, grading out to values of 13.3 and 5.6, respectively. His four-seam fastball is a respectable 0.1, and even his sinker and curveball are passable at -2.0 and -3.5. For a quick point of reference, his four-seam fastball had not graded out as better than a -8.4 value from 2014 to 2017, and he also was throwing it a lot more during those years too. The use of the cutter this season, and last season in a shorter amount of appearances, is a new development. The Astros have helped Miley to feel more and more comfortable featuring it, and it’s a big reason he’s had the results that he has gotten.

Before 2018, Miley had never thrown his cutter more than 11.9% of the time, but he rocketed its usage up to 42.1% and then even pushed it higher this year in Houston, as he’s thrown it on 47.7% of his pitches in 2019.  Similarly, Miley’s changeup usage the past three seasons has climbed. After just 10.7% in 2017, and 16.7% usage in 2018, he has ratcheted it up to 20.2% in 2019. As mentioned, a result of the jump in these two pitches is that he’s throwing fewer four-seam fastballs, fewer sinkers, fewer sliders, and fewer curveballs than his career averages. The result has been improved performance with the worse offerings, too, since it’s harder for batters to sit on his four-seam fastball or sinker like they did for most of his career.

For his career averages, those two pitches made up more than half of his pitches (26.6% four-seam fastballs, 27.6% sinkers), and those figures are even lower than they used to be since he’s moved so far away from them over the past two years. It seems pretty self-explanatory, but Miley simply has begun featuring his two best pitches and thrown fewer of the ones that he has worse results with this year. What a novel concept, throwing more of the pitches you are best at throwing, and getting positive results!

In the age of starting pitchers (and ones on his team!) such as Verlander and Cole routinely striking out 10+ batters per game, Miley is being successful without a K/9 anywhere near the top of the league, as it sits at a mediocre 7.73 entering the final month of the season. Because of his ability to suppress exit velocity, though, he has more room than most on balls in play. It’s also worth noting that just one season ago when Miley pitched in a little over 80 innings with the Milwaukee Brewers, his K/9 was a paltry 5.58. That miserable number, in addition to a BB/9 at 3.01, makes it easy to see why the Astros didn’t have to engage in any bidding wars for his services in 2019. But Houston saw through the surface numbers and noticed Miley had begun to evolve how he attacked hitters and helped him continue that evolution.

Taking a look at the ERA leaders for American League starters this year, the top four are Verlander, Cole, Charlie Morton, and then Miley. ERA is far from a perfect stat, and even with all of his success, Miley’s FIP is a more believable 4.36, but it’s still extremely respectable. Skeptics will point to that number and say Miley has been a fluke, and it’s possible he will still be undervalued. That seems more unlikely to be the case going into 2020, though, as Miley will be a desirable commodity on the market since GMs will see the tangible changes he has made, and Houston understandably may be hesitant to commit to him in a big way.

The Astros will almost assuredly be focused first on re-signing Cole, who will justifiably be the big fish on the starting pitching market. Even after Cole, the Astros have Verlander and Greinke signed for the near future with any potential combination of Lance McCullers Jr. eventually returning from his rehab and guys like Brad Peacock, Collin McHugh, Framber Valdez, Josh James and eventually top pitching prospect Forrest Whitley will conceivably have a chance to contribute.  Houston will likely feel confident in its organizational ability to build the next Miley through player development, and not want to extend the current Miley the payday he’ll seek.

It’s a testament to the Astros in a lot of ways, since they unquestionably have had positive impacts on the values of Verlander and Cole, as well as on Morton, who improved upon his career numbers significantly with Houston in 2017 and 2018  before continuing that success with the Tampa Bay Rays after leaving in free agency this year. The sustained success of Morton specifically, after he left the Astros, makes it even more likely that I’ll be higher than the market on Miley next year if he does end up signing somewhere else, since I do not expect him to suddenly turn back into the pumpkin he has been for the majority of his career, as he’s been changing for the past two seasons now—not just with the Astros.

Even if he happens to re-sign with Houston, though, it’s true that likely more other fantasy players will want to invest, but I’ll be even more bullish on him and still anticipate making him a mid-round target in 2020. After all, even if Miley were to regress slightly, Houston’s organization is a heck of a deodorant.