Recapping Day 35 of the KBO

All you need to know from Day 35 of KBO action.

Day 35 of the KBO’s 2020 season was brought us two games decided by one run each, with the Kia Tigers edging out the SK Wyverns and the Lotte Giants doing the same to the LG Twins. The Samsung Lions and the KT Wiz split a doubleheader while the Kiwoom Heroes walloped the first place NC Dinos. But did the Hanwha Eagles record their record-setting 19th consecutive loss? We’ll have to wait to find out, as rain paused the game after three innings. When they last left off, they were trading runs with the Doosan Bears but were ultimately down 4-3. Whether you’re cheering for sweet relief or fierce futility, you’ll be doing so with baited breath.

Miss some of the action from last night? Click on the links below to watch! 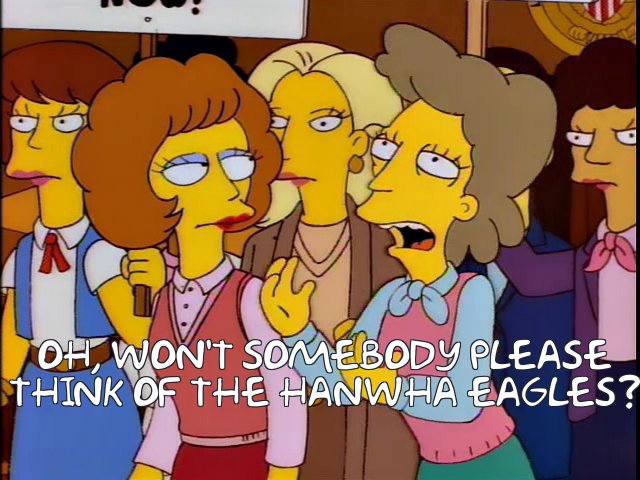 Let’s take a look at the top performers from the day, brought to you by Tim Jackson and Jai Correa.

Tyler Saladino (3B, Samsung Lions): 2-4, 2B, HR, R. 2 RBI. Saladino’s double in the fifth inning topped off a strange side for Samsung that also included a dinger and two wild pitches en route to four runs scored. His homer in the eighth was a shot to left field that tacked on an insurance run. Saladino is hitting over .270 with an OPS sitting near nine. The former major leaguer has made his way into 31 of the team’s 33 games and the consistent reps seem to be helping. He never appeared in more than 93 MLB games in a season.

Koo Ja-wook (DH, Samsung Lions): 2-4, HR, R, 2 RBI, BB. Koo’s third inning, two-run bomb in game two put Samsung ahead but it wouldn’t be enough to see them through. It represented the DH/rightfielder’s third of the year through 15 games. He’s only gotten into 15 games but has made them all count, with an average at .377 and six doubles on top of his home runs.

Kang Baek-ho (1B, KT Wiz): 2-4, HR, R, 2 RBI. This line is now sold out. No more 2-4 lines with home runs last night. Sorry, gang. Kang’s fourth-inning blast opened scoring for the game, and you can catch the sweet swing below. It wouldn’t be enough to spark a Wiz win (not whiz wit, for you Philly folks) but was the batsman’s seventh homer of the year and 14th extra-base hit. The 20-year-old is hitting for average again for the third straight year and it’s not an empty output — his OPS is also floating around 1.000.

Jeon Jun-woo (LF, Lotte Giants): 1-4, HR, 2 R, 2 RBI, BB. In a game where his team scored seven runs, no one had more than one hit. Jeon’s first-inning homer was his sixth of the year and 19th extra-base hit. It came early but in a one-run game it ended up being a difference-maker. The veteran’s slugging continues to look like a thicc triple-decker BLT, sitting at .518 for the year.

Park Kun-woo (RF, Doosan Bears): 2-2, HR, 2 R, RBI. Park’s second-inning shot to left field put the Bears ahead before Mother Nature delayed the game. It was his third of the year and 16th extra-base hit. The other 13 are all doubles.

Kim Tae-Hyun (DH, Hanwha Eagles): 1-1, HR, R, 2 RBI. He’s trying. He’s really, really trying to help Hanwha avoid their record-setting 19th-straight loss. But alas, Kim’s first-inning dinger — his first of the year! — tied the game at two for only the briefest moment, as Doosan struck again in the top half of the second inning to pull back ahead (darn you, Park Kun-woo).

Kim Hye-sung (SS, Kiwoom Heroes): 3-5, 3B, HR, 3 R, 4 RBI. Kim, he sung like a beautiful songbird in Saturday’s whomping of the first place Dinos. With an OPS below .700 in each of his first two full seasons, the shortstop isn’t exactly known for his bat, but his efforts so far in 2020 might change that. He’s taking more walks and driving the ball better. His triple and homer today gave him three each for the year. He also has three doubles. Like everyone else and their mother on Saturday, Kim’s homer was also to left field.

Lee Jung-hoo (RF, Kiwoom Heroes): 2-4, 2B, HR, 2 R, RBI. Okay, I lied. I’m going to allow one more 2-4 line with extra-base hits here. And that’s because Lee Jung-hoo is awesome. He’s been cooking with gas all season and it feels like I write about the 21-year-old star every Saturday. He’s turning excellence into a run-of-the-mill affair. Lee’s triple slash for the season is up to a silly .378/.492/.641. He can be your Hero, baby. He can kiss away the pain. He will stand by you forever, but don’t take his breath away ’cause we still got some games to play.

Lee Myung-gi (LF, NC Dinos): 2-3, 2 R, RBI, BB. Not the sauciest line, but it’s the best any Dino could muster on Saturday. Lee’s average is up to .345 for the year but it’s a pretty whack .345, as he only has four extra-base hits through 113 ABs. That’s par for the course for Lee, too, as he’s never hit double-digit homers in a season. His doubles production is also down in 2020: in seasons of at least 100 games, he’s registered 17 or more, but he’s well off that pace right now. That said, he is on track for a career-high in runs scored.

Kang Baek-ho with a solo home run in Game 1 pic.twitter.com/wWyUn7qAoc

Moon Seung-won (SK Wyverns): 7.1 IP, 2 ER, 3 H, 8 K, 2 BB. In arguably his best start of the season, Moon was able to shut down the Tigers’ offense into the eighth frame despite suffering a tough-luck loss in a pitcher’s duel as reliever Kim Jung-bin gave up a hit that scored the inherited runner from the starter. To understand Moon’s season, we need to segment it into three parts. The first was mediocre – a 4.63 ERA and 1.46 WHIP over his initial 11.2 IP – the second was abysmal – 8.00 ERA and 2.00 WHIP over his subsequent nine innings – with his third being magical – 2.33 ERA and 0.83 WHIP over his last 19.1 IP. Furthermore, the right-hander has been able to add 23 strikeouts against only five walks in this most recent period, speaking to true dominance. It looks like we’re going to see the best of Moon going forward.

Im Ki-young (Kia Tigers): 6 IP, 0 ER, 3 H, 6 K, 1 BB. On the winning side of this pitcher’s duel, Im had the easier task of shutting down a lowly Wyverns offense. The Tigers southpaw stuck to the fundamentals – getting strikeouts and keeping the ball on the ground. Im was able to strike out six, including striking out the side in the third, while garnering seven ground outs, involving two double plays. The left-hander will enter his next start with a 2.82 ERA, 1.12 WHIP, with 34 strikeouts and five walks.

David Buchanan (Samsung Lions): 6.2 IP, 2 ER, 5 H, 3 K, 0 BB. Buchanan has continued his sterling run since being lit up for ten earned runs against the Twins four starts ago, keeping a good Wiz lineup at bay over nearly seven innings. Unfortunately, we should mention that the right-hander gave up two home runs and while only solos, were the most in an outing since the aforementioned start against the Twins (3). Nevertheless, Buchanan has lowered his season totals to a 3.63 ERA and 0.90 WHIP, as he’s only given up three earned runs over his past 26 2/3 innings.

Cha Woo-chan (LG Twins): 6 IP, 3 ER, 3 H, 5 K, 5 BB. Cha’s start was not pretty – walking five is always ugly – but it was enough to keep his team in front until the Giants exploded for four runs in the seventh inning to eventually win the game. Like his last outing in which he walked five men as well, Cha bent but did not break in his six innings, allowing a minimal number of runs despite having at least one baserunner in every inning except the fifth. Hopefully, he keeps the baserunners to a minimum to more easily repeat his success.

Yang Hyun-jong (Kia Tigers) vs Lee Geon-wook (SK Wyverns): Sunday’s slate does not feature any of the ‘must-watch’ pitchers, so we’ll take a matchup of competent starters. For the Tigers, Yang will take the ball. The veteran southpaw has only allowed two earned runs over his last 11 innings, lowering his season totals to a 3.89 ERA and 1.27 WHIP. The Wyverns will send out young right-hander Lee Geon-wook. In his first season as a starter, Lee has been able to keep the runs to a minimum – 3.78 ERA – despite walking (8) nearly as many men as he has struck out (13). We’ll see if that formula continues to work tomorrow.