Going Deep: You Should Pay Attention to Jorge Polanco

Don't underestimate what Jorge Polanco did in the second half of 2017.

If you look at the final line of Jorge Polanco’s season last year, you might have the same reaction as you would listening to a Maroon 5 album. Meh, ok I guess ¯\_(ツ)_/¯. Polanco finished the year slashing .256/.313/.410 with 13 home runs, 60 runs, 74 RBIs, and 13 stolen bases. A perfectly serviceable season, especially in real-life baseball, but nothing special as far as fantasy goes.

But then you take a look at his first- and second-half splits and you might notice a major difference:

That’s quite a split, and whenever I see a first- and second-half split like that, I immediately look to see if the player had some kind of noticeable skill change, and Polanco had just that. Polanco changed his approach and significantly improved his plate discipline. 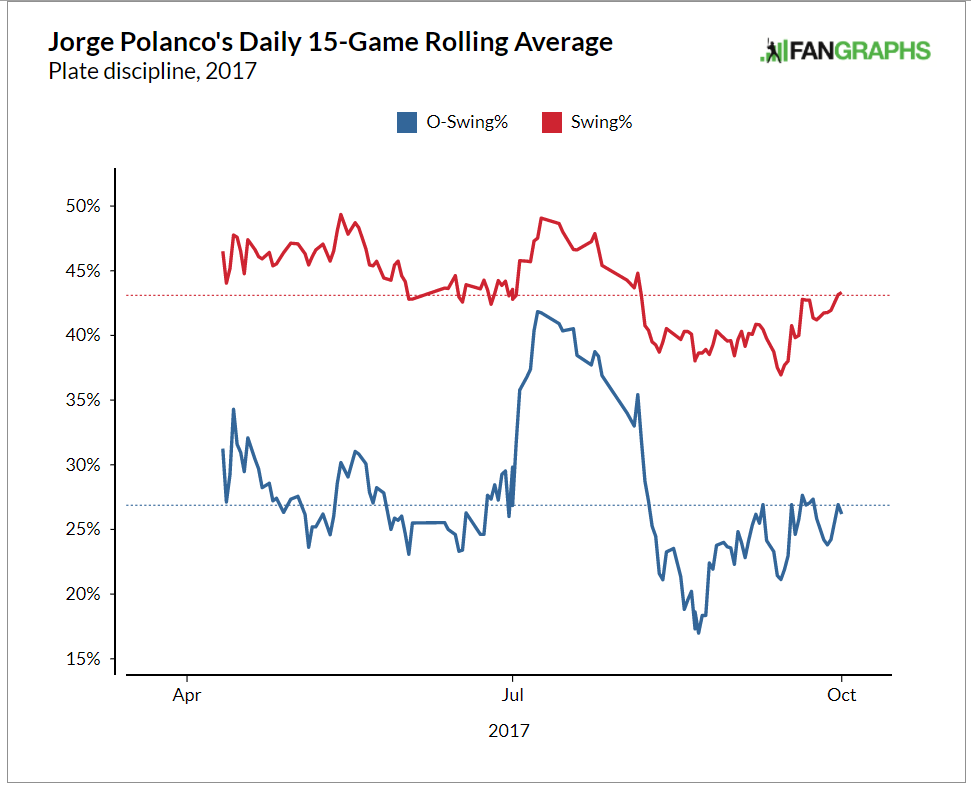 In fact, over the last two months of the season last year, Polanco had a swing rate under 41% and a contact rate over 84%. The only other players in baseball that did that were Anthony Rendon, Brett Gardner, Joe Mauer, Mookie Betts, Nick Markakis, and Zack Cozart. Not only that, but Polanco had a slugging percentage over .550 during that time, and not a single hitter in the MLB maintained that swing/contact rate with that level of slugging percentage.

One of the keys to that increase in plate discipline was learning not to swing at offspeed and breaking pitches nearly as much: 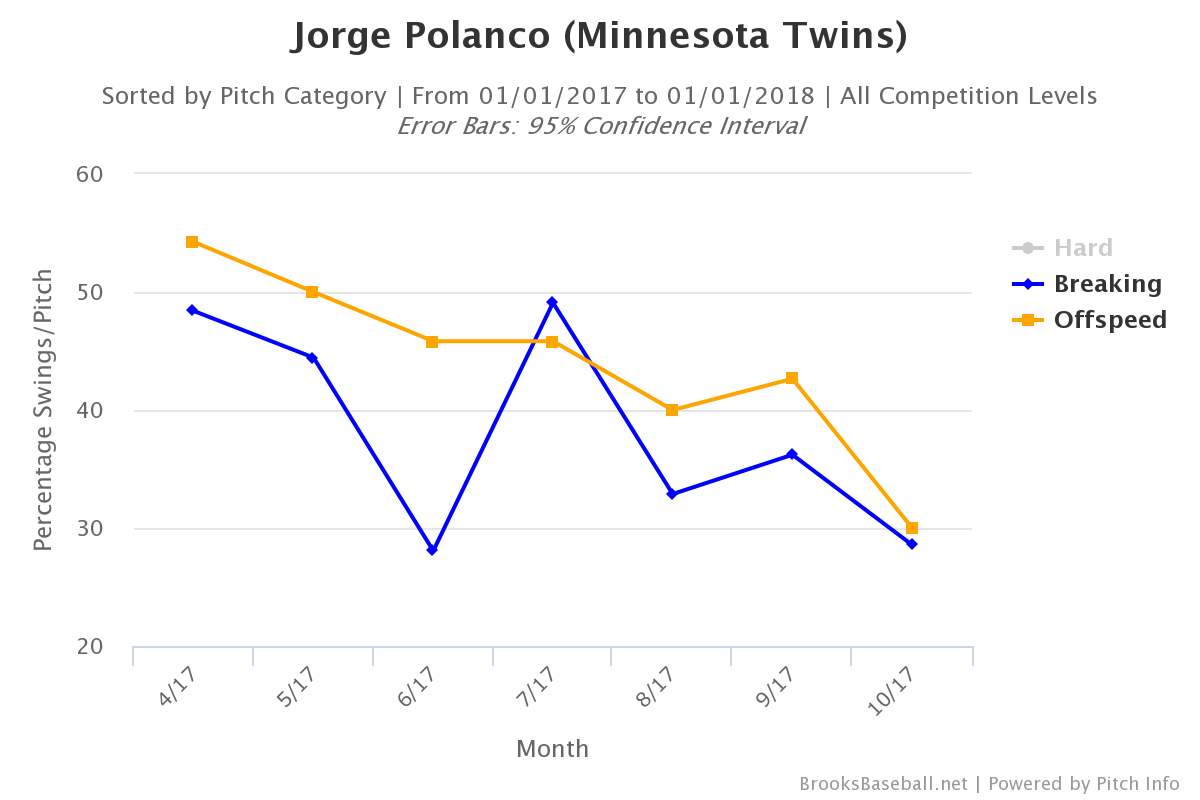 As a result, not only did his walk rate jump up to 8.6% from 6.6% in the first half, but he started making better contact, hitting significantly fewer groundballs: 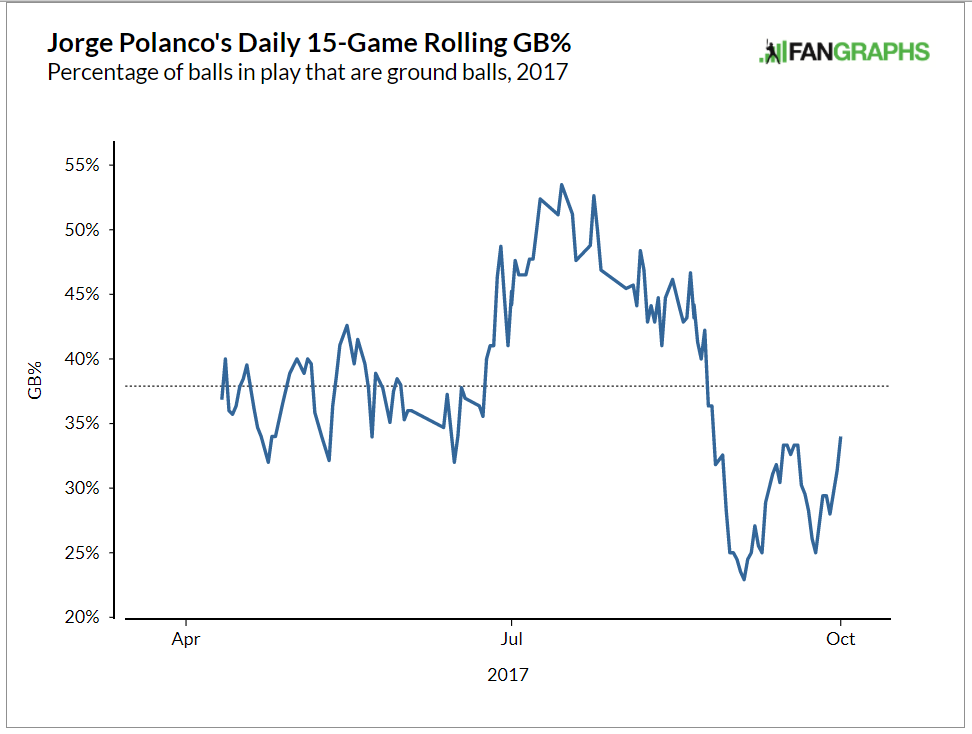 In fact, he just started hitting the ball better in general. Below you can see a comparison of his launch angle from 2016 (on the left) and 2017 (on the right). You can see in 2016 he hit a lot of balls that were essentially line drives. That’s not a bad thing, but if you want to develop your power as a hitter, you need to add some loft to the ball, and that’s exactly what Polanco did in 2017: 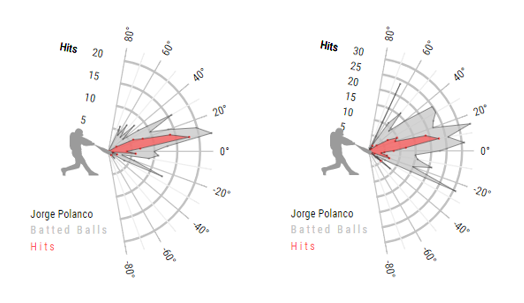 As of right now, Jorge Polanco’s ADP according to NFBC ADP is 204, which is almost free. He’s going to be someone who’s likely available at the tail end of your draft, and there is plenty of reason to think that Polanco could have somewhat of a breakout year this year. He’s got a nice power/speed combo and if these plate discipline adjustments stick, he could hit for a solid average. Given that he’s at such a low price right now, he’s a very low-risk investment, and the reward could be great.