Going Deep: Yonder Alonso is Back

Ben Palmer explains why he thinks Yonder Alonso is back to being a fantasy relevant player.

If you drafted Yonder Alonso, you probably drafted him late—his ADP was about the 22nd round in 10-team leagues, maybe 21st in 12-teamers—so when he started off the year sucking hard, it was pretty easy to drop him.

I’m not gonna lie, I was worried that Alonso’s fantastic 2017 was going to be a flash in the pan. He had hit 28 home runs last year after hitting no more than seven in a single major league season by changing his swing and joining in the fly ball revolution. Breakouts at age 30 don’t happen all that often, so it was perfectly fair to be pretty cautious.

That’s why Alonso is sitting at 30% ownership right now in fantasy leagues—because people were (rightfully) skeptical, and because so far this year he’s been really bad. On the season so far, he’s slashing .234/.299/.461 and people have been dropping him faster than George Michael dropped Andrew Ridgeley to start a solo career.

So what changed? Has he just been getting lucky lately? I’d argue that he hasn’t, and rather that he’s made some adjustments—specifically two adjustments that are related.

First, his BABIP has changed a fair amount this year: 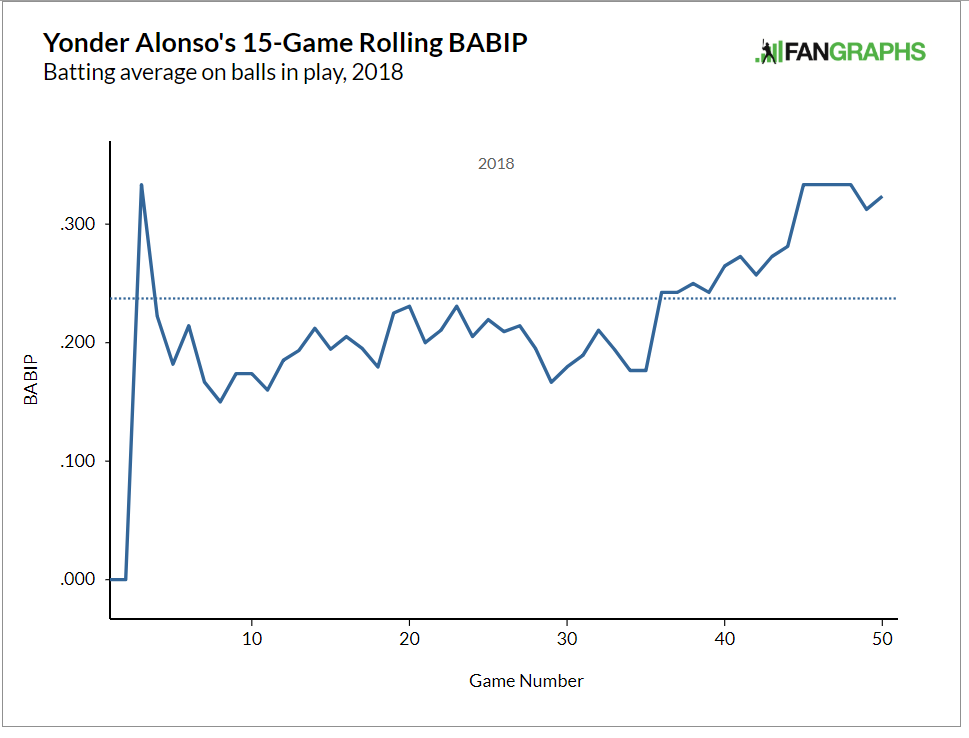 That’s a pretty big BABIP swing, from .202 between the start of the year and May 8 to .324 since then. Second, relatedly, his groundball rate has changed as well: 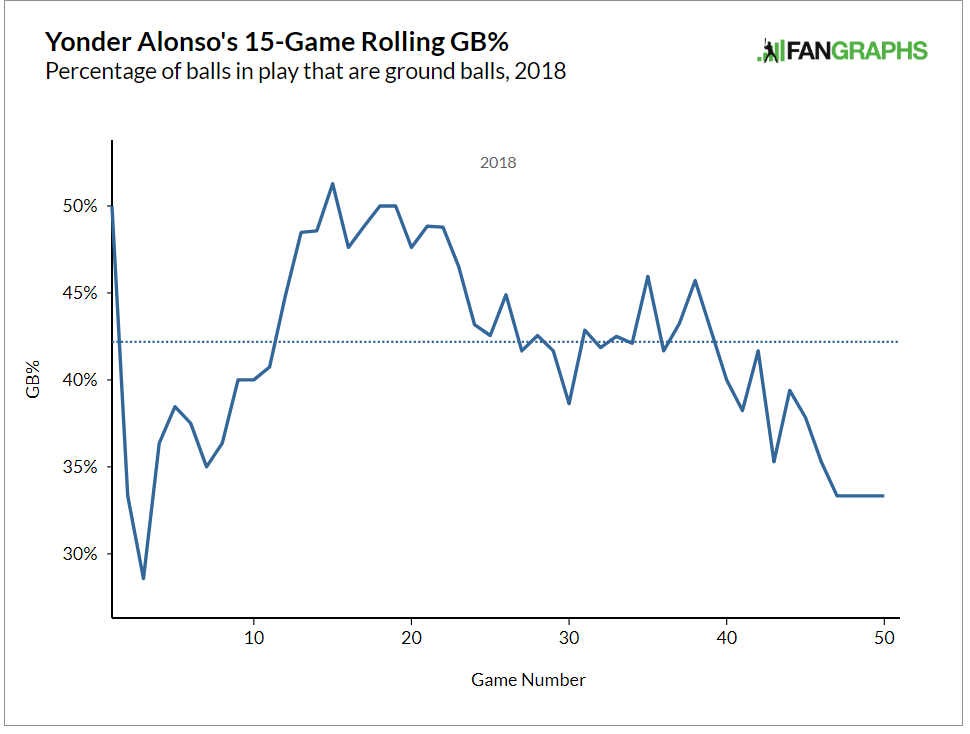 Not only that, Alonso’s seen his plate discipline improve. From the start of the season through May 8, Alonso had a strikeout rate of 22.1% and a walk rate of 7.6%. Since then, that strikeout rate has dropped to 18.9% and that walk rate has increased to 11.3%.

Alonso’s still got great power, that hasn’t changed all year. Despite his struggles, he’s still got 11 home runs on the year with a .228 ISO (compared to .235 last year), and as you can see, he’s still lofting the ball well, as his launch angle hasn’t changed much at all (2017 on the left, 2018 on the right): 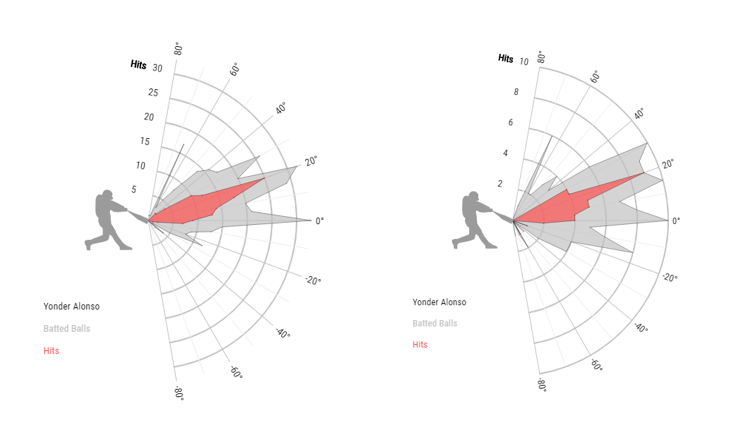 In fact, I’d make the argument that Alonso is back to being the same player he was last year, provided these adjustments stick (and I don’t see any reason why they wouldn’t). Take a look at his stats from his last 15 games compared to his stats last year:

Outside of the difference in batting average (which I expect to regress some), those are remarkably similar stats.

Now, this is the point where you go down to the comments and shout “YOU’RE NITPICKING STATISTICS TO FIT YOUR NARRATIVE BEN, YOU’RE A BAD ANALYST AND YOU SHOULD FEEL BAD,” to which I say I understand your point of view. I felt that 15 games was a sizable sample, and even if you stretch it to 16 or 17 or 20 games, the point still remains for the most part.

And what is that point? That point is that Yonder Alonso looks like he’s back to being the Yonder Alonso we all knew and loved last year. A guy who, without a doubt, has the ability to hit nearly 30 home runs with a batting average that isn’t going to kill you.

He’s not going to hit in the .230s all year, that average is going to come up as his BABIP regresses to the mean (it already is), especially since he’s back to hitting the ball the same way he did last year. I think this is the beginning of a triumphant return for Alonso back to being very fantasy relevant, and if he’s available in your league (and chances are he is), I’d go grab him.

25 responses to “Going Deep: Yonder Alonso is Back”