Ben Palmer takes a look at why Andrew Benintendi has been struggling so much this season.

When people were drafting him in around the fourth or fifth round this year, I thought that was perfectly reasonable. I mean, the guy went 20/20 with a good average in his rookie year all supported by his peripherals, so we should at least expect that, right?

Well, so far this year, Benintendi has been a bit of a disappointment compared to the expectations levied his way in the preseason. So far, he’s slashing .244/.333/.395 on the year with just one home run and five stolen bases. He’s on pace for about 25 stolen bases, so that isn’t really an issue, but the average and power are, and it’s fair to wonder if this is just some bad luck, or if Benintendi is having some serious problems.

Diving deeper into Benintendi’s stats on the year leads you down an interesting path. When I see a hitter slumping this poorly, my first instinct is to look at plate discipline and batted ball stats. A look at Benintendi’s plate discipline shows he’s just as good as last year, with a walk rate of 12.3%, a strikeout rate of 17.4%, a chase rate of 28.3% (last year was 29%) and a whiff rate of 7.4% (last year was 7.6%).

Where you see the issue is in his batted ball stats. Specifically, his quality of contact stats: 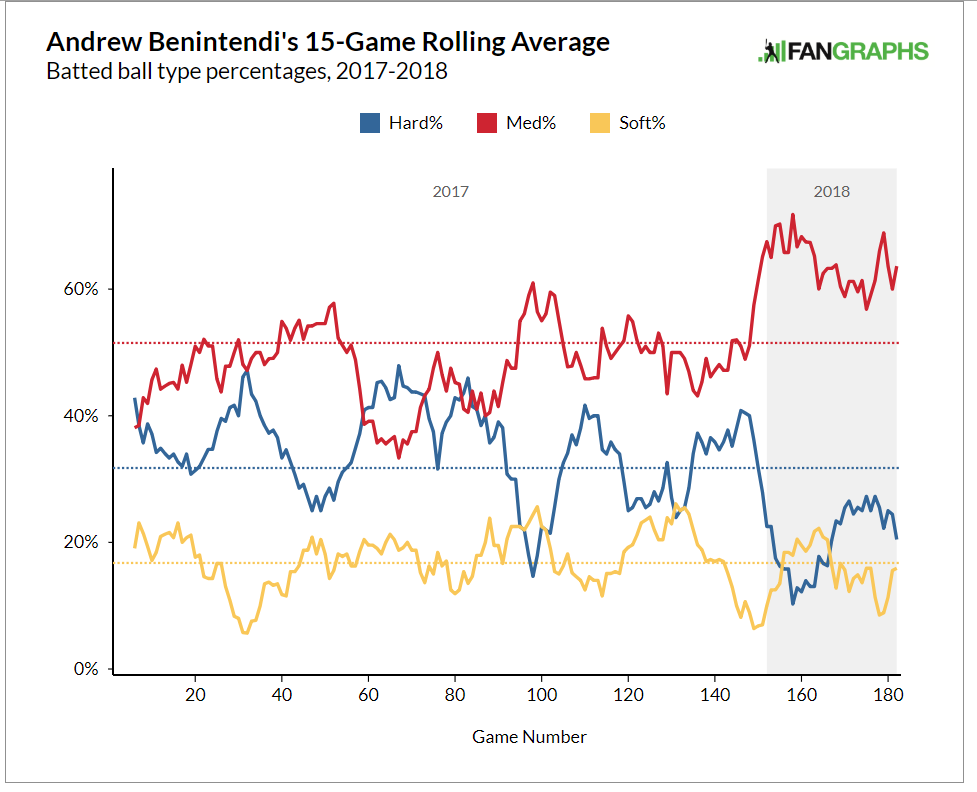 At first glance, that’s very concerning seeing his hard-hit rate drop so significantly, but the rest of his batted ball stats don’t support the narrative that he’s declining in skill. Take a look at his batted ball percentages this year compared to last year:

So aside from a very slight increase in his groundball rate and a slight decrease in his fly ball rate (along with the aforementioned drop in HR/FB rate), he’s hitting the ball just about the same. In fact, normally when I see a drop in hard-hit rate with a relatively static fly ball rate, I’d expect to see more infield fly balls, but that didn’t happen either.

So what is going on with Andrew Benintendi? Well as you can see from the batted ball graph from earlier, he not only saw a drop in his hard-hit rate, but a jump in his medium-hit rate, from 49.1% last year to 61.9% this year, while his soft-hit rate has remained fairly stable, increasing only slightly from 16.6% last year to 17.5% this year.

That’s good news, because if Benintendi’s hard-hit rate had dropped that significantly and we saw a subsequent increase in his soft-hit rate, I would be very concerned (especially if his groundball rate increased with it). But that’s not the case. In fact, what’s been happening with Benintendi is that he’s hitting a bunch of fly balls that are dying in the outfield. 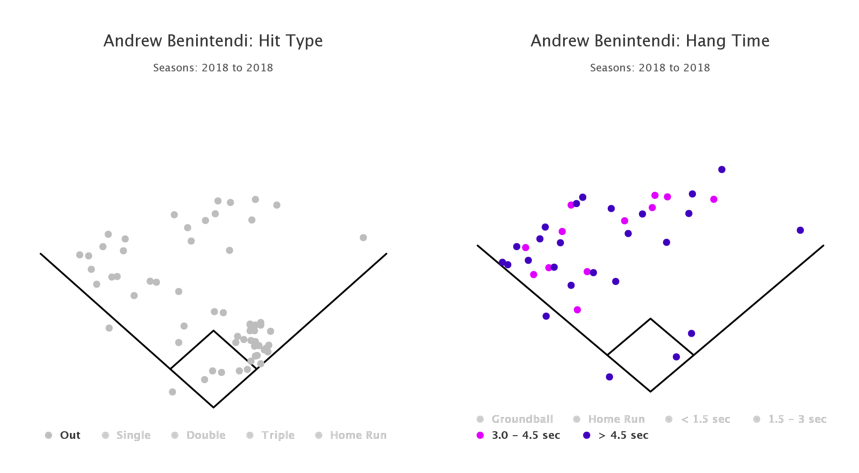 On the left, you can see all the outs Benintendi has made this year. On the right are all the fly balls he’s hit that have hung in the air without turning into home runs (so, essentially, mostly catchable fly balls). It’s pretty clear that Benintendi is hitting a bunch of these fly balls that are dying in the outfield, which is why his hard-hit rate has declined so much and why his medium-hit rate has increased so much.

It’s also worth noting that Benintendi has started pulling the ball a lot more this year, increasing his pull rate from 34.3% last year to 44.3% this year, which typically is good news for power.

Considering the fact that Benintendi’s batted-ball profile has changed very little, aside from the hard-hit rate decrease and medium-hit rate increase, I’m not overly concerned about his production going forward. Some of those fly balls are going to turn into home runs, hitters like Benintendi don’t typically have medium-hit rates as high as he does.

In fact, last year’s leader in medium-hit rate was Dee Gordon with 59.2%, followed by Billy Hamilton at 59.0%. That’s not the kind of hitter Benintendi is, which leads me to believe that his medium-hit rate is unsustainable, and given that it doesn’t seem like he’s hurt, nor has his plate discipline gotten any worse, I’d expect his average and power to go back to normal soon enough, making him an interesting buy-low candidate.