Ben Palmer takes a look at the changes Hyun-Jin Ryu has made to his repertoire and how that could translate to fantasy success.

Typically, when veteran pitchers suddenly start being good, I’m pretty skeptical, more so than I would be if they were a younger pitcher. But that doesn’t mean that older pitchers don’t make changes that lead to success, and that’s exactly what Hyun-Jin Ryu has been doing so far this year.

So the next question then is, what is Hyun-Jin Ryu doing differently? It turns out, quite a bit. He’s been toying with his repertoire and gained better control of his pitches, which has been key to his success.

Let’s take a look at what Ryu’s repertoire has looked like so far this year (because what is a Pitcher List article without GIFs? I would never do that to you).

First off, he throws a pretty standard four-seam fastball. It averages about 91 MPH with fairly average movement:

It’s been a pretty garbage pitch in the past. Like, it had a -21.6 pVAL last year, it was that bad, and that mostly stems from the fact that he’s had trouble controlling it, throwing it in the zone just 50.5% of the time last year (which is pretty bad for a fastball).

It’s not a strikeout pitch, it’s a setup pitch, which is why it needs to be controlled. So far this year though, Ryu has been controlling it significantly better, throwing it in the zone 59.1% of the time, which is why it’s got a 4.9 pVAL on the year. That’s the first time he’s had a positive pVAL on his fourseam since 2014. It’s also actually producing a decent 11.4% whiff rate too.

Speaking of fastballs, one of the biggest changes Ryu has made so far has been increasing how much he uses his cutter:

It’s a pitch he added to his repertoire last season and he’s started using it a lot more this year, and as a result, his usage of his fourseam has plummeted: 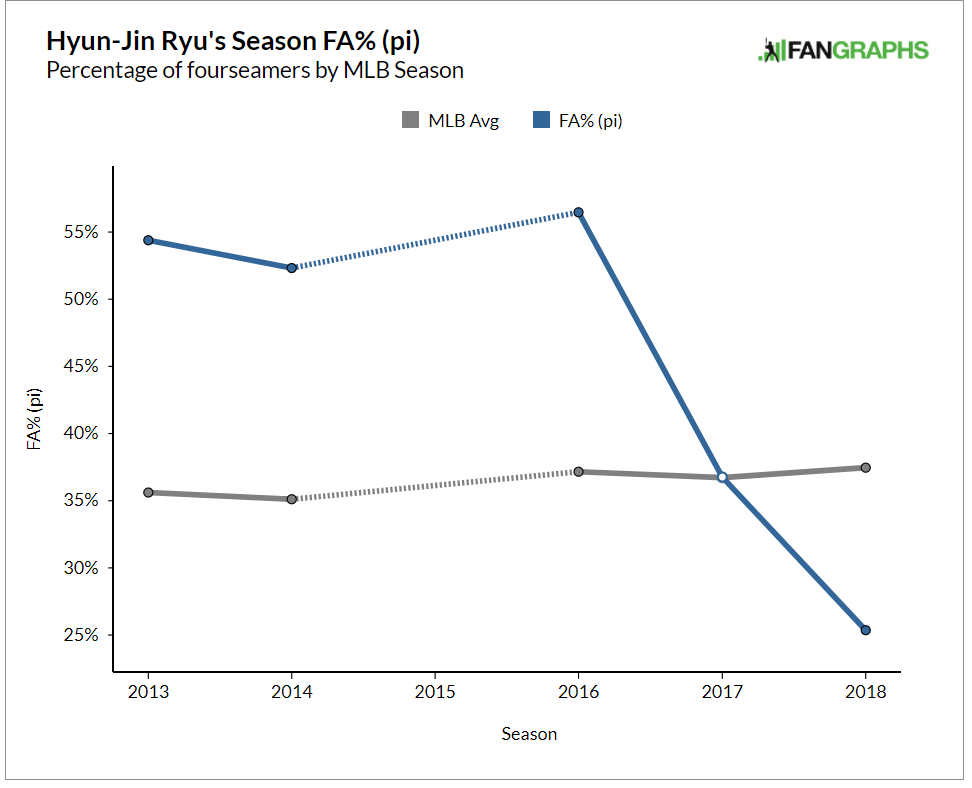 Instead, he’s using his cutter. As far as cutters go, it’s a fine pitch, coming in at about 87 MPH on average with decent movement. It’s been successful though, as hitters are slashing just .143/.217/.333 against it.

Along with his increased use of his cutter, Ryu has also added a sinker for the first time in his career. He hasn’t thrown it a whole lot, and he’s had some trouble controlling it, but it’s worth noting that he has added this as a new pitch to his repertoire.

Then, there’s his curveball:

It’s a biiiiiiiig slow hook of a curveball, coming in around 74 MPH on average and dipping as low as 69 MPH sometimes. It works fairly well as a strikeout pitch, generating an 11.7% whiff rate last year, but he’s had trouble controlling it, throwing it in the zone just 39.2% of the time last year.

That is not the case this year, however. So far, Ryu has controlled his curveball significantly better than he did last year, throwing it in the zone 50.9% of the time, which has led to beautifully-placed curveballs like this one:

And not only is he controlling the curveball better, but the pitch has changed a bit: 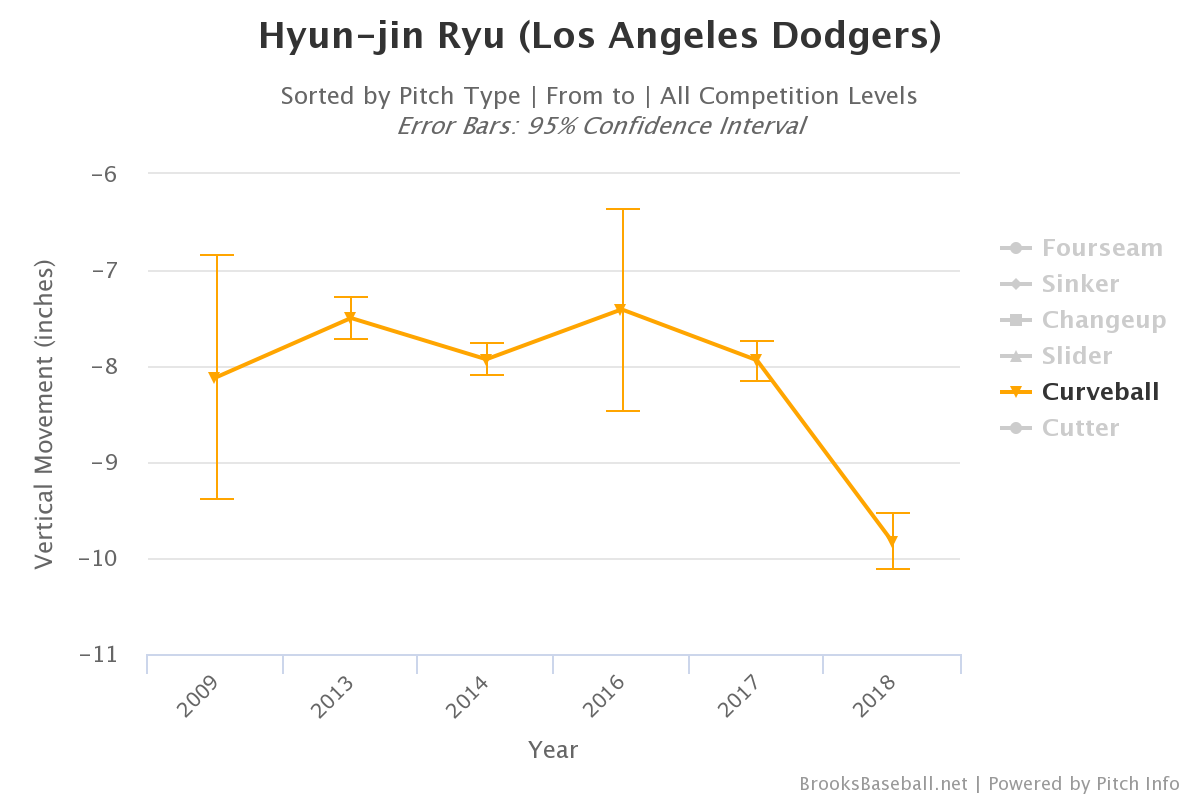 Ryu’s curveball now has the most vertical drop on it that it’s ever had in his career, almost four inches more drop than it had last year and about four-and-a-half more inches of drop than your typical curveball. So not only is he controlling it better, it’s dropping further than ever before.

The final major pitch of Ryu’s repertoire is his changeup:

There’s one more pitch that I want to mention, and it’s not because it’s a good pitch. In fact, it’s just the opposite. Ryu’s slider is bad- it’s been bad for awhile- yet he’s insisted upon throwing it somewhat frequently. Problem is, he can’t control it worth anything, throwing it in the zone just 31.8% of the time last year, so a lot of pitches end up looking like this:

That’s why I’m actually encouraged that he’s barely throwing the pitch this year, throwing it just five times so far this season. If he’s realized how weak the pitch is and that he doesn’t necessarily need it with his re-tooled repertoire, that could be good.

So what’s the overall takeaway here? Well, it’s this — Ryu has toyed around with his repertoire, adding movement to his curveball, decreasing the usage of his mediocre four-seam, and increasing the use of his cutter, all while controlling his pitches significantly better.

I don’t think it’s any coincidence that we’re seeing his zone rate shoot up: 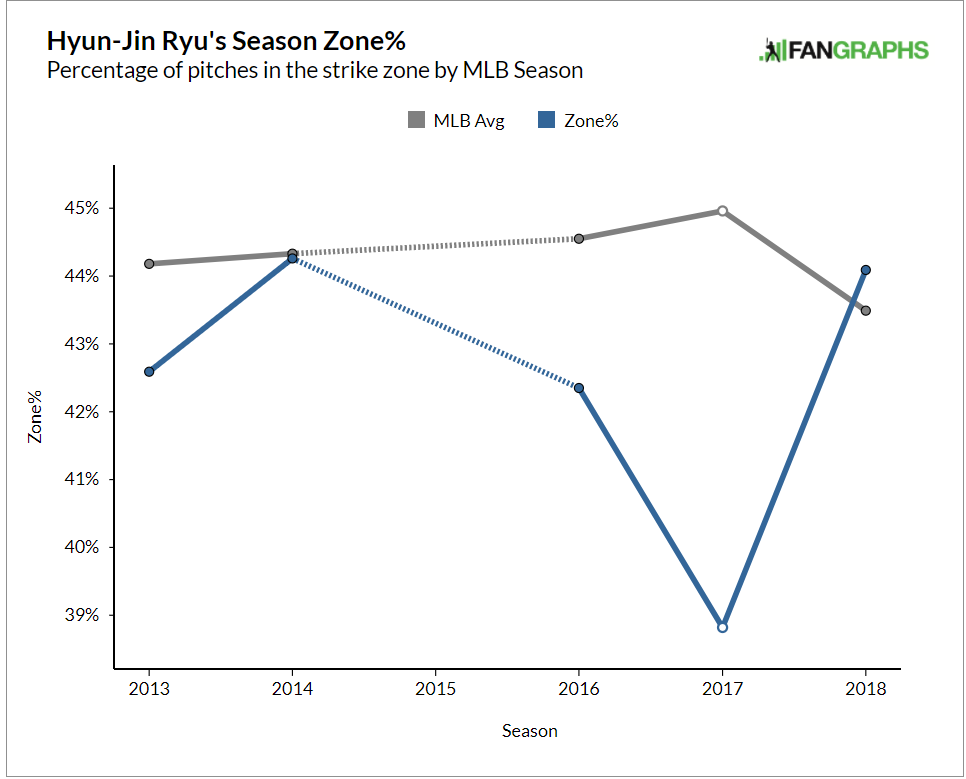 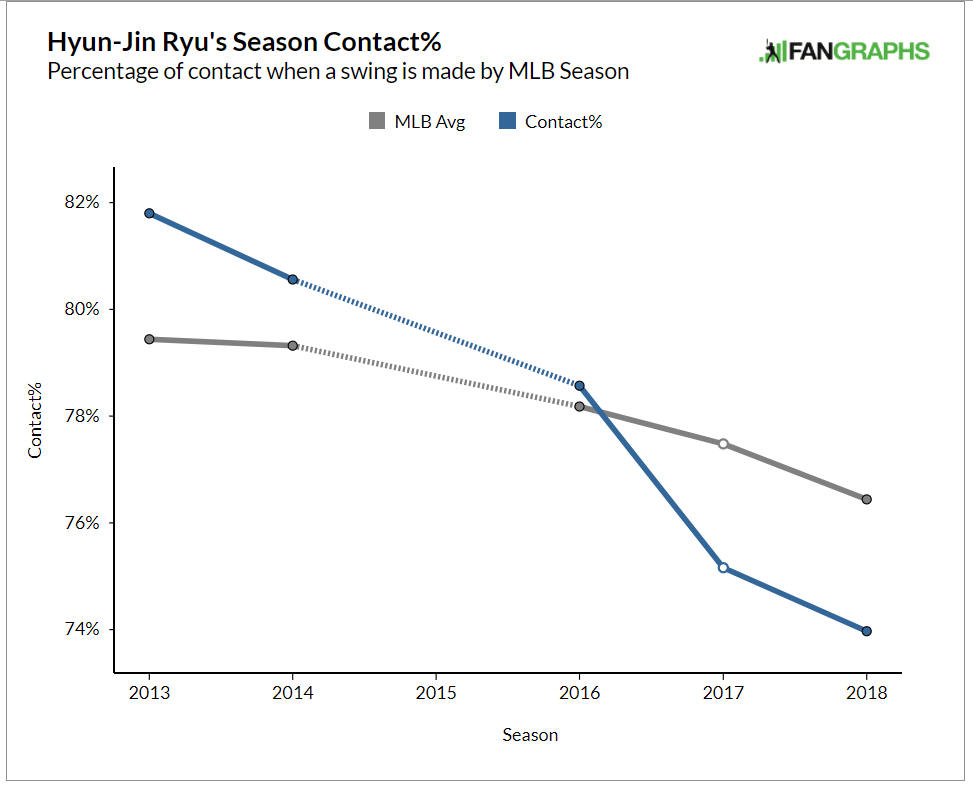 The two are very interconnected, and that, along with his peripherals suggest to me that this is more real than it isn’t.

And yes, stop yelling at your computer screen, I haven’t addressed the elephant in the room — his health. Ryu started 24 games last year, and I think he could get to that mark again, perhaps even better.

I don’t necessarily think that Ryu is going to have some kind of insanely good year, but as long as these changes stick (and I think they will) and he stays healthy, I could see him with an ERA in the mid-3s with an above-average K/9, and I think that’s certainly a useful fantasy asset.