Ben Palmer explains why he thinks Andrew Triggs could be in for a good season this year.

I’m going to wax poetic about baseball for a second, so hang with me.

One of the things I’ve always loved about sports is the beauty in it. I’ve always believed there are typically two types of beauty in sports: natural beauty and artistic beauty. The natural beauty of sports is just something that looks beautiful regardless of who does it. A basketball swishing through a basket, the sound of a baseball being hit by the barrel of a bat, things like that. The artistic beauty of sports is something that looks beautiful because it was crafted that way by a specific individual. The way Ray Allen shot a jumpshot, the way Ken Griffey Jr. swung a bat, the way Clayton Kershaw throws a curveball.

Baseball has one of the greatest examples of artistic beauty in all of sports, and that’s through pitching. It’s why I love pitching, it’s why I love making GIFs of pitches and watching pitchers, because it’s beautiful, because it’s art. The way a pitcher can take a small baseball, this little sphere made of yarn and cork, and make them move and dance so smoothly through the air just by using different grips and different ways of throwing the ball, it’s pure beauty.

I say all of this because Andrew Triggs, the 29-year-old pitcher for the Oakland Athletics, throws one of my favorite pitches to watch, one of those pitches that you look at a hundred times and go “How does he make it move like that?” It’s magical, it’s beautiful, and it’s one of the reasons I’ve found him to be such an interesting pitcher. But we’ll get to that.

Before we dive too much into Triggs, let’s take a look at who he is, because he’s an interesting pitcher. Triggs has traditionally been a sidearm pitcher, something you don’t often see out of starters. Usually sidearm (and submarine) pitchers are used out of the bullpen because they often have relatively major righty/lefty splits. A right-handed sidearm pitcher will typically be much better at getting right-handed hitters out than lefties, mostly because lefties can see the ball better out of a right-handed sidearmer than righties will. Sidearm guys also tend to have pitches with a lot more horizontal movement than vertical, which, again, is great for getting out righties, not so much for lefties.

Triggs is different though. Certainly his pitches have a lot of horizontal movement to them, but they’ve got some vertical movement too, and he doesn’t have nearly the lefty/righty splits you’d expect, with a career 3.80 FIP and .208 wOBA against lefties, and a 3.81 FIP and .311 wOBA against righties.

Generally speaking, Triggs throws three pitches (he’s thrown others, but these are his main ones).

His sinker, which typically comes in around 90 MPH and has some beautiful movement to it:

His slider, which is a solid pitch that produced a 7.2 pVAL last year:

And my favorite pitch of his, his curveball. This curveball reminds me a lot of Corey Kluber’s curveball, or slurve if you want to call it that and simultaneously anger people who hate the term “slurve” (cough cough Nick Pollack cough cough).

Seriously, look at this thing:

No, really. Look at it

It’s gorgeous. It whips around quick, has tons of movement, and looks almost unhittable.

So here I am singing the praises of Andrew Triggs like he’s the second-coming of Jesus or something and you’re probably wondering “Yea, okay, he’s got a pretty curveball, so what?” You’re not wrong, it’s not like he’s an ace or even a top prospect or something. He’s 29-years-old, he was cut by the Orioles so they could keep Pedro Alvarez on their roster (contains inner Orioles fan rage), he’s not exactly a notable name. But I think he’s got some notable upside, and I think he could be stepping into it this year.

So can we trust what Triggs has done so far this year? I think so, to a point obviously (small sample size and all). He’s made a noticeable change that I think could help him in the long run, and it has to do with his arm slot.

Take a look at his horizontal release point over his major league career: 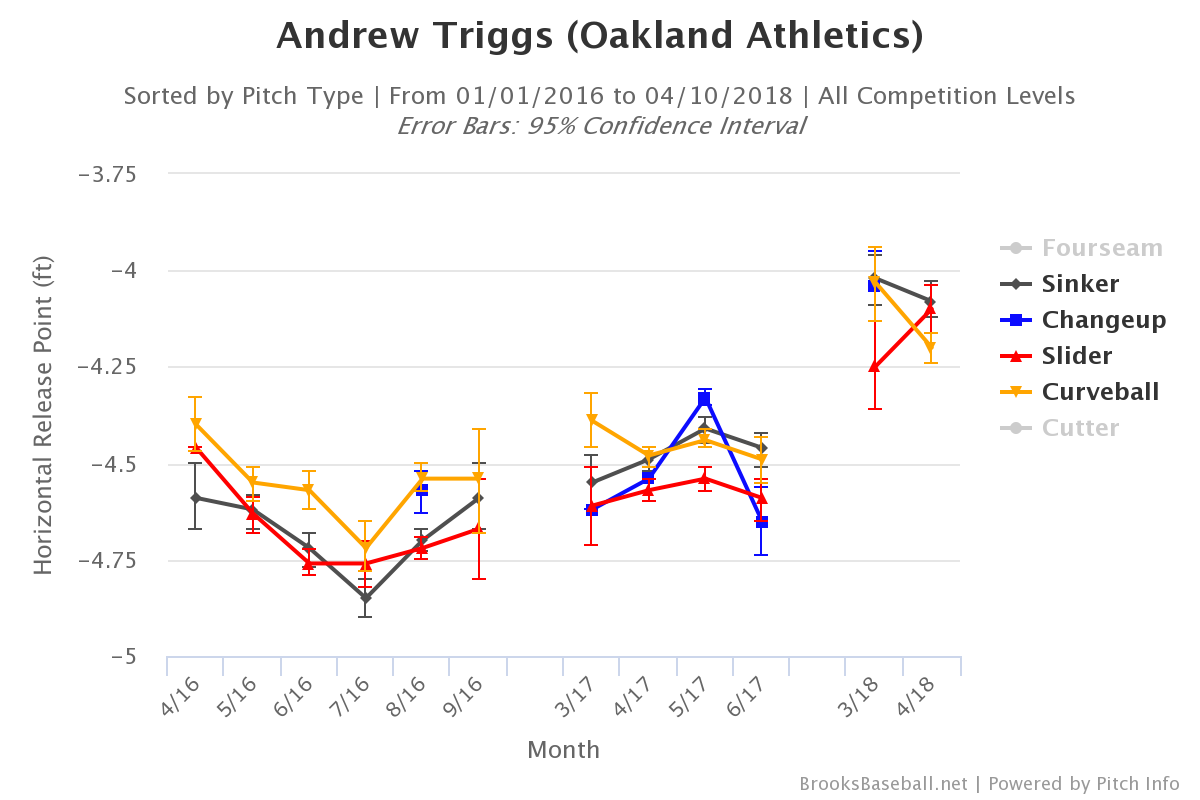 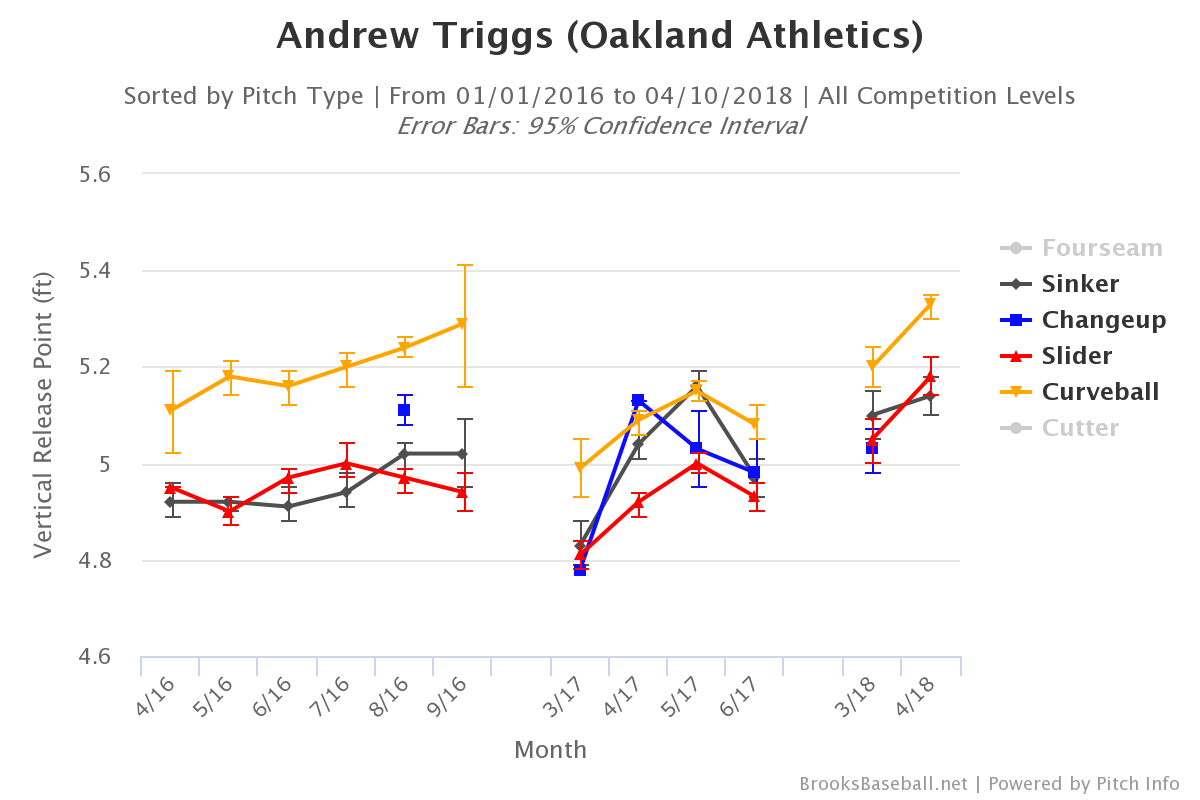 Which is exactly the case with Andrew Triggs. He’s becoming less of a traditional sidearm pitcher.

So why does this matter? Well, to understand that you have to understand the biggest issue Triggs has had his entire career: a lack of control. His pitches have great movement, and that’s awesome, but he threw them in the zone just 41.4% of the time last year, which if he had qualified for the leaderboards, would’ve tied him with Gio Gonzalez for seventh-worst in baseball.

That zone rate isn’t as much of a problem if he gets hitters to swing at his pitches, but he doesn’t. In fact, his swing rate last year was 40.8%, which would’ve been lowest in the league had he qualified last year (Gonzalez was the worst a 41.8%). Now, pitchers like Tyson Ross have had success in the past with low swing rates because their pitches have enough movement that hitters will often chase them, but obviously it’s better for your high-movement pitches to also be well controlled. Triggs hasn’t quite done that so far, but I think that step could be coming this year with the changed arm slot. A higher (for lack of a better word) horizontal release point can often mean more control but less movement. Triggs already has loads of movement, so even if he loses a little but gains control, it could go a long way to him being successful, especially if he starts locating his curveball like this:

And that’s really been the major thorn in Triggs’ side, the thing that’s kept him from sustaining success. He controls his sinker fairly well, and as a result, he’s been pretty good at creating groundballs, but if he can control his curveball and his slider too and maintain that balance between movement and control, he could really take a step forward.

I’m not saying that Triggs is going to be an ace, but he has definite upside, and if this change in release point sticks and results in better control, he could be a very useful starter for fantasy purposes. Even if the control doesn’t come, he’s still got very interesting strikeout upside, and if you’ve got the roster flexibility to grab him as a speculative add, I’d do it.