Carlos Gonzalez made a tweak at the end of the 2017 and it could carry over into 2018 back in Colorado.

If you’ve ever consistently read any of my stuff (which is maybe like one whole person and that’s probably my dad), you know that I’ve had a long love affair with Carlos Gonzalez. I’ve liked him for a very long time and he’s been a consistent fixture on my fantasy teams for years.

Last year, I advocated for him hard, and he went and had the worst year of his career (that he’s been healthy for). If you drafted CarGo where he was going last year, you got screwed. And if you drafted him because I told you to, let me take a moment to apologize profusely and beg for your forgiveness.

But there’s reason for hope. Seriously. I’m not just blinded by my love for CarGo as a baseball player, there really is reason to hope that he has a bounceback this year. CarGo had some pretty stark first- and second-half splits to the season, as you can see:

Like I mentioned back when I talked about the first- and second-half splits from Jorge Polanco last year, whenever I see splits this stark, I have to wonder which half is reality. Was CarGo especially unlucky in the first half of the year, or was he especially lucky in the second half?

The truth is somewhere in between. Those second-half stats came supported by a .390 BABIP while those first-half stats came with a .264 BABIP, which means he’s neither a .220s hitter nor  .300 hitter. But there was a reason he started getting better in the second half of the year – he made a noticeable change to his approach.

There were two things that happened, actually. First, CarGo got more patient at the plate, something he was struggling with earlier in the year: 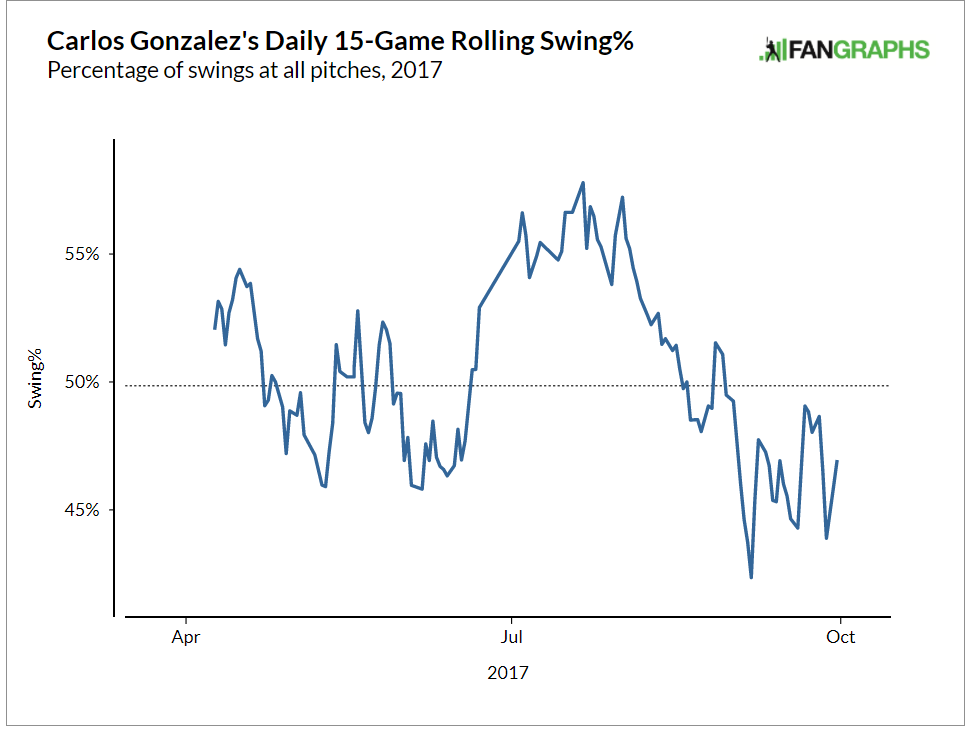 Specifically, he stopped swinging at fastballs nearly as much as he had before: 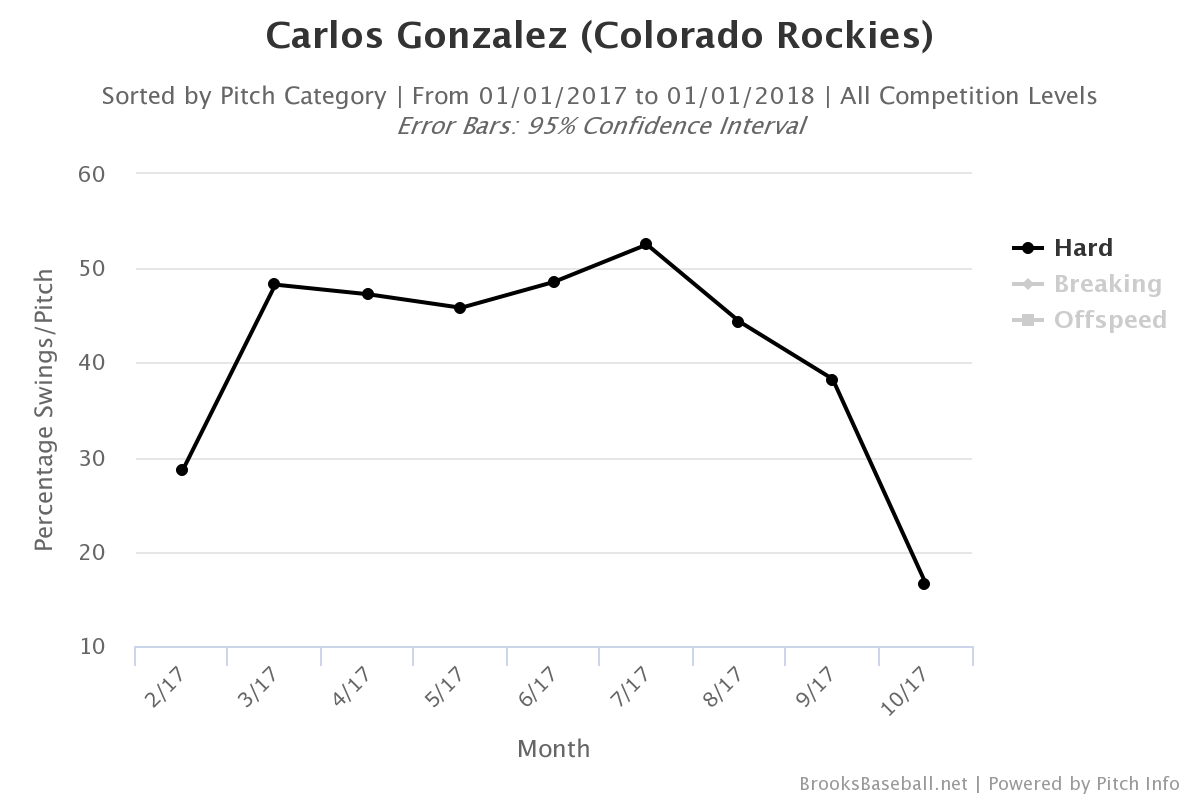 Second, he changed his swing. Way back when CarGo was a prospect, he used to have a problem with the way he held the bat. He would wrap his hands around the bat, which means that he’d hold the bat so that his palms were on the handle, wrapping his fingers inwards. This led to the barrel of the bat dropping and a more undercut of a swing, which caused him to either swing under the ball or to strike out. On the advice of his hitting coach Don Baylor, he loosened his grip and held the bat more with his fingers than his palm, which helped level out his swing.

Last season, CarGo had started wrapping his hands around the bat again, just like he used to as a kid, and at one point later in the season, he noticed it and corrected it. You can see the difference in the angle of his swing too.

Here’s CarGo’s swing before the adjustment:

And here it is after:

It’s subtle, but it was a noticeable change.

And not only did CarGo improve his plate discipline and change his swing, but he did one more thing – he started sleeping. Gonzalez reportedly was a “mental mess” during a lot of the year last year, but in August he went and saw a sleep specialist who helped him figure out how to get more sleep. CarGo himself credited that sleep specialist with his success later in the year. “It turned out that my sleep was the biggest issue all year for me,” he said to USA Today Sports. “I had no idea. But once they told me what to do, it completely changed everything for me.”

There’s a lot going on here, but one thing is clear – with these changes came success. As all these changes were happening, CarGo started to look more like vintage CarGo, increasing his exit velocity: 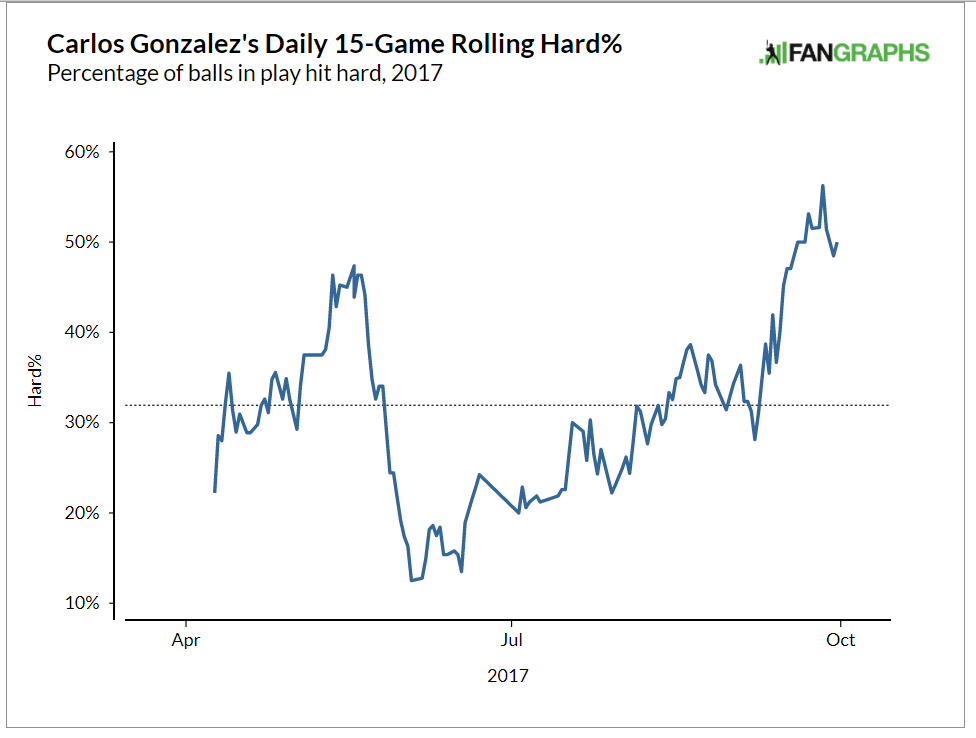 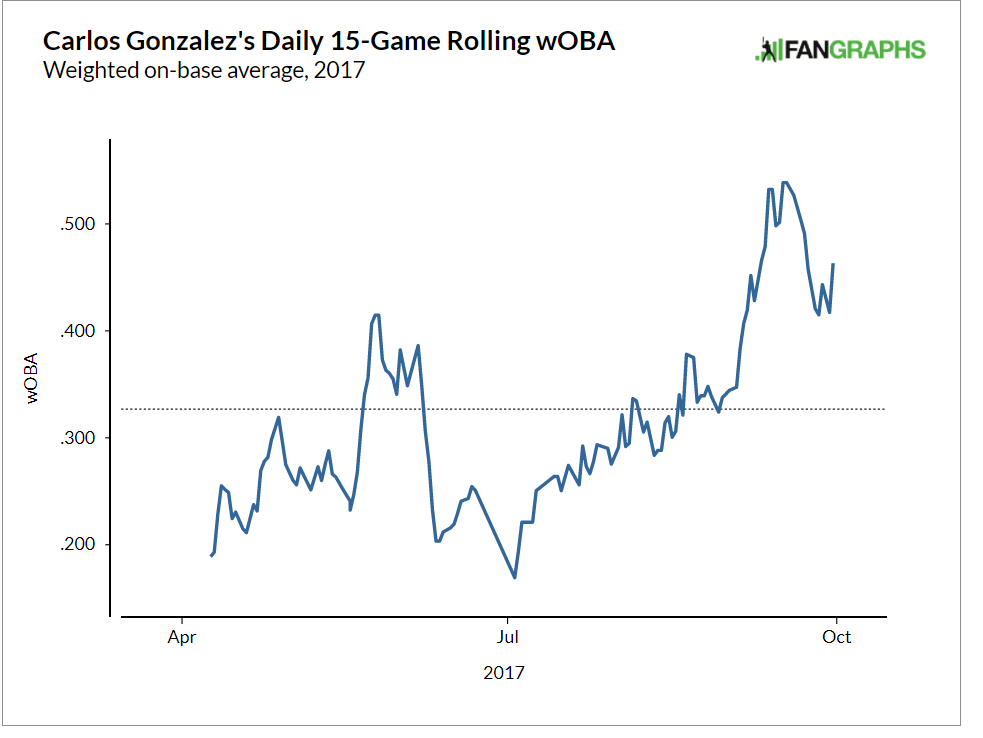 Could this be correlation and not causation? Sure, it’s possible, but that’s a lot of correlation. And will these changes stick into next year? I’m inclined to think they will, especially since Gonzalez is now on a one-year deal back with the Colorado Rockies. If he wants to keep playing in the MLB for a few more years, he needs to prove that he’s not old and done.

I’ve heard all the arguments against drafting CarGo this year, and I understand them. He’s not the hitter he used to be, not even close, but there’s plenty of reason to expect a bounceback coming into this year, especially since he’ll be back in Coors Field. As of right now, his NFBC ADP is around 300, which means he’s pretty much going undrafted in many leagues.

If you can grab CarGo in the later rounds, I think he’s worth the investment. If the changes don’t stick and he’s bad CarGo all over again, then you wasted a late draft pick on him, no big deal. But if he has a rebound, he could well out-perform his ADP. He’s not what he used to be, I’ll give you that, but he’s not dead either.