Welcome back!  Sorry about the absence last week (I know I was sorely missed), but I’m back with plenty of thoughts and musings about our national pastime! I’ll never leave again I promise. Just like a few weeks ago, I’m taking a big picture look at the league. In that edition, I was all about the league-wide numbers (and Moms!) and how they were different than last year. Today I want to take a look at the Awards race. Let’s jump right back in:

Before we get into the heavy stuff, I want to take a moment to celebrate the league’s most unexpectedly fun team this year: the Minnesota Twins. There are just so many awesome storylines to follow with them. While most teams seemingly spent their offseason desperately trying to avoid free agency, the Twins saw an opportunity. By adding Nelson Cruz, Jonathan Schoop, C.J. Cron, Marwin Gonzalez, and Martin Perez, they transformed their team and created the seemingly unstoppable, home run crushing force that is quickly running away with the AL Central. They currently lead the league in home runs, runs, and runs batted in. They are hitting for a .246 ISO as a team. They aren’t a one-trick-pony team either, as they rank eighth in ERA and fifth in pitching WAR; their staff is led by Jose Berrios, who has finally become the destroyer of worlds ace that we have been waiting for. Berrios is joined by a reborn Jake Odorizzi, Martin Perez, and a stellar bullpen. Their homegrown talent is all incredibly fun as well. Byron Buxton has always been an electric defender but it looks like he might finally be putting it all together at the plate as well. Miguel Sano came back from injury and has been blasting balls into orbit ever since. Jorge Polanco is quietly becoming the superstar hitter no is talking about. Willians Astudillo stole our hearts here at Pitcher List and might be the most fascinating hitter profile we’ve seen in years. Mitch Garver and Jason Castro are suddenly hitting like they are a Voltron version of Mike Piazza. Max Kepler is finally emerging as a legit power threat. All of this without mentioning the fact that Eddie Rosario is proving all his doubters wrong by adding 40+ HR power to his game. Oh, and did I forget to mention they have the best record in the league so far? Get on board with this team as they aren’t going anywhere.

If I had any photoshop skills whatsoever I really wanted to take Austin Riley, Pete Alonso, Michael Chavis, Vlad Gurerro Jr., Brendan Rodgers, and Fernando Tatis Jr. and somehow put them into this photo: 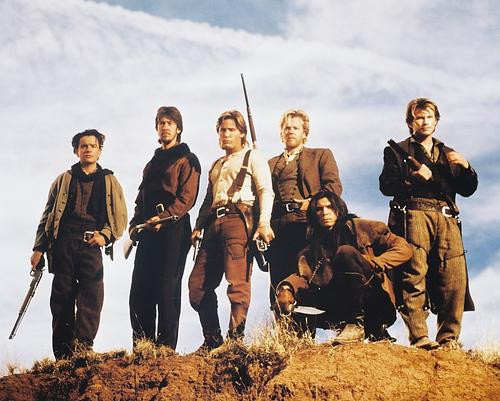 Young Guns was easily one of my favorite movies when I was growing up.  It’s like the perfect so-bad-it’s-good movie, but a big chunk of the fun was the young cast. You had Emilio Estevez, Charlie Sheen, Kiefer Sutherland, Lou Diamond Phillips, and Dermot Mulroney all in the same place. It was like a who’s who of the best young, up-and-coming actors and, while the movie isn’t perfect by any means, you could feel that excitement for the future in that movie, as if these were the actors you were going to be watching for the next 20 years. This is exactly how I feel about baseball this year. There are so many exciting rookies in the league right now that it’s hard not to get excited about how much young talent we’re seeing in baseball. I haven’t even mentioned Willians Astudillo, Alex Verdugo, Nick Senzel, Garrett Hampson, Griffin Canning, Matt Strahm, Mike Soroka, or Chris Paddack!  There’s even more on the way with Kevin Cron, Bo Bichette, and Yordan Alvarez all here or on their way up at some point this season. Combine all that young potential with the fact that within the top ten hitters by WAR only one player is older than 27 (George Springer is 29) and there is just so much youth and talent in the league right now. Cody Bellinger is only 23! Heck, Mike Trout is only 27, we’ve probably got another five to 10 years of his career to come! Trevor Story, Jorge Polanco, Xander Boagarts, Francisco Lindor, Joey Gallo—all under the age of 27.  I can’t think of a better time to be a baseball fan—that’s for sure.

Awards at the 50-Game Mark

Seeing as we’re a third of the way through the season, I thought it might be time to check in on the awards and see who I think are the most deserving front runners. I’m not saying I think that this is who would win if the voting were held today; this is who I think deserve to win. I’ll list my top five for MVP, next week we’ll talk Cy Young, and after that we’ll discuss Silver Sluggers and Gold Gloves.

I know my first name up there will come as a bit of surprise, but I firmly believe that Polanco belongs in that first spot right now. It’s hard to argue against a guy who is batting .340/.411/1.014 with 9 HRs for a top-two offense in the league while also being a positive player at a premium defensive position.

Trout is Trout. He’s the best player in the league and leads the AL in WAR. My guess is that he’ll be reclaiming his crown by the halfway point in the season.

Perhaps the most ridiculously fun masher to watch this season, Gallo has just kept hitting the ball harder and harder this year and it is paying off to the tune of a .281/.419/1.079 batting line with 15 HRs and an unreal 18.8 BB%—all while currently being on pace for 100+ runs and runs batted in.

I wrote about Brantley yesterday. A player hitting .323 while on pace for over 30 HR, 100 RBI, and 100 R while batting cleanup in the best offense in baseball has got to be in the top five.

Alex Bregman has been unreal so far this season. He’s batting .263/.393/.940 with 15 HRs, which is out-of-this-world good. The crazy part is that Bregman is typically a second-half player, so I don’t even think we’ve see his best yet this season. Has a real shot at 40+ HR and—oh by the way—he’s already walked five more times than he has struck out thanks to his incredible 17.0 BB%.

It has to be Bellinger right now. Normally I would have put Yelich in there easily, but he’s missed some time so far this season and Bellinger has been the best hitter in baseball so far.  I can’t even put into the proper context just how awesome hitting .394/.474/1.240 with 18 HRs is. Pitching against Bellinger right now has got to be like the equivalent playing chicken with a comet.

If you wanted to put Yelich number one you’d get no argument from me; as I mentioned above, I mostly docked him for missing a few games. Much like Trout in the AL, I think most likely we’ll see Yelich back in in the pole position when we revisit these rankings at the halfway point.

Back when I wrote my Interpreting BABIP pieces a month or so ago, I talked about both of these next two players. I mentioned having hope for the struggling Bryant, but that I was worried about his shoulder and he looked a bit off in his swing. Well I am no longer worried. He has his season-long numbers up to .288/.411/.987 with 27 extra base hits and 42 runs scored! That puts him on a pace for nearly 130 runs on the season.

Like Bryant, Rizzo got off to a rough start to the season, but since the calendar turned to May he has been a revelation. Hitting .278/.393/.979 with 14 HRs is fantastic. The most exciting part is his .307 ISO which, if holds up, will be a career high by over 50 points.

A true five-tool player, Story earned his spot in one of my articles last week. He’s producing in a big way with a .277/.345/.863 line with 13 HRs, 22 total extra base hits, and 44 runs, which much like Bryant puts him on a pace for 130+ Runs scored. He plays a premium defensive position and plays it well.

I’ve always been a big fan of the writings of Henry David Theroux (especially Walden Pond) and his approach to teaching and learning. Much of what he talks about is that the things you learn are not nearly as important as learning how to learn (if that makes sense), and then having a continual desire to learn and experience new things—to see things from a different perspective. If you have read any of my previous musings, then you know I use this thought process pretty heavily in my approach. I try pretty hard to always be looking at baseball from a different angle and be questioning our understanding of different aspects of the game. Oftentimes this involves taking a theory or discipline from outside of baseball and seeing if it can provide that different point of view. It’s often similar to when it was very in vogue in the 80s and 90s for a businessman to read Sun Tzu’s The Art of War to gain insight into their own field. It is my plan to try and find similar things for baseball. I figure that when I find something that applies I should share it here so we all benefit! In that vein, this week I began reading up on a subject I briefly studied in college called Game Theory. It’s essentially the math of how we weigh and make decisions. Probably the most famous example of game theory is the Prisoner’s Dilemma, but there is so much more to the discipline then that. What I’m hoping it will do is give me greater insight into the fantasy decisions that we make (especially trades) and perhaps even some insight into the decisions the players and managers make during the games. What I hope to do is each week I’ll have a write up here on what I’ve learned and how it applies to fantasy and to baseball and we’ll go from there! At some point, I’m also hoping to do the same with principles of physics, wind, and weather; once I do so I will report on them here as well.

The biggest thing I picked up from the first couple of chapters was that the key to Game Theory is that you have to be able to view your decision making based your opponents needs and goals as opposed to your own. Once you can figure out what is in their best interest, you can then start to make your best decision. I’ll dive into this more for next week, but as we start getting pretty heavy into fantasy trade season that might be a good place to start.

Alright folks that’s all I got for this week! I’ll see you here next Sunday with my Cy Young picks, more on game theory and so much more!

Eloy will be on your young guns list very soon.

Fantasy 101: How to Turn Projections Into Rankings and Auction Values January 20, 2020